Worried for her friend, Rhona meets Adam and explains how Vanessa seems to be having difficulty engaging with Johnny. Rhona tells him they need to be supportive and keep an eye on her. Adam approaches Vanessa about their concerns, but is she ready to open up?

Aaron’s uneasy when he hears they’re going to try and wake Robert up tomorrow. Elsewhere, Andy also struggles to digest the news and Andy is further riled to see how much Diane and Victoria care for Robert, despite all the pain he has caused. Andy insists whoever shot him should have done a better job.

The atmosphere between Bob and Brenda is strained and April suggests they do a trust exercise she learnt at school. Bob is worried Brenda wants to leave him for good. He tells her that the worst part of being in prison was being away from her. Suddenly, Brenda falls back without warning but will Bob catch her?

Ashley is sad Johnny brings back memories of Baby Daniel. Over at the Woolpack, Laurel returns from her training and says she is up for a new challenge, but is she as confident a she is making out? Later at the graveyard, Ashley and Laurel share a moment by Daniel’s grave.

Relationships remain strained as Sarah continues to miss Pete. Andy tells Debbie to take the kids away on holiday in light of Robert being woken. 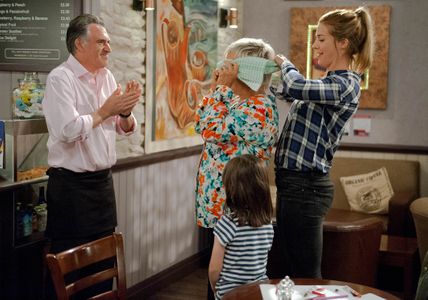