Rhona’s still angry at Paddy for messing the adoption meeting up but he promises he won’t be distracted at their interview today. At the shop, Aaron’s thrown when Rhona quizzes him on Paddy’s whereabouts, she presses him for details and he is deeply troubled when he’s forced to lie. Over at the surgery, Paddy and Vanessa argue and Paddy accidentally reveals Rhona’s drug addiction in front of the Social Worker. They quickly try to backtrack as Rhona arrives. She’s thrown to learn her addiction secret is out, and gutted when the Social Worker questions whether or not she can be trusted. Has Paddy ruined their chances of adoption?

Megan panics her secret is out when Brenda discovers she is pregnant. She’s stressed about it becoming public knowledge but is grateful as Nikhil offers her support. Jai watches them from a distance and is left seething at their closeness. Sam’s defensive when Jai questions him over Megan and Nikhil’s relationship. Seeing Sam’s clear feelings, Jai enjoys taunting him over Megan. Left alone, Jai makes a phone call to Tanya, will he ruin things for his brother?

Ashley’s touched when Laurel invites him to her AA presentation, however, he soon realises he has an appointment at the memory clinic. Ashley’s grateful when Bob offers to accompany him to his appointment.

Marlon’s embarrassed when April tells Carly she’s asked Santa to bring him a girlfriend. Bob lies to Brenda when she questions why Ashley would buy them pantomime tickets. David’s dejected after failing to find Val’s ring but grateful when Rodney offers help. 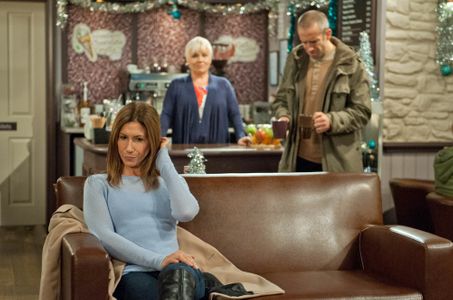