Emmerdale 8/09 - Has Ged already made an attempt on their lives?

Bob's shaken when Harriet tells him about Ged's threat. Meanwhile, Sandy locks himself out Ashley lets him stay at his for the day. Sandy falls asleep but when Harriet and Gabby walk in to discover the gas on and Sandy’s life at risk, Harriet's dismayed to remember Ged's threat. Bob's unnerved it could have been Ged whilst Harriet decides they need to warn people. Brenda panics about the threat of Ged, they are just sitting targets.

Dan tells Kerry it takes ages to become a paramedic and it requires a degree. But Kerry is supportive. Will Dan be inspired?

Joanie apologises for giving Belle advice and tries to find out what previous issues Lisa is skirting around. She's shocked when Lisa tells her she was assaulted. Soon Joanie and Lisa cheer Belle up by telling her their embarrassing incidents they had with boys and Belle is given food for thought in how to behave around Kirin. Meanwhile, Kirin tells Vanessa about Belle and how he is dreading bumping into her. There's a frisson of sexual tension and a sense they both regret being apart. Later, Belle follows Lisa's advice, but will it work?

Vanessa and Leyla reluctantly agree to Carly moving back in, it’s her last chance. Carly's livid to learn Ross was cheating on her with Debbie. Alicia's fuming with David over Portugal. Whilst, David recruits Tracy to spy on Pollard. 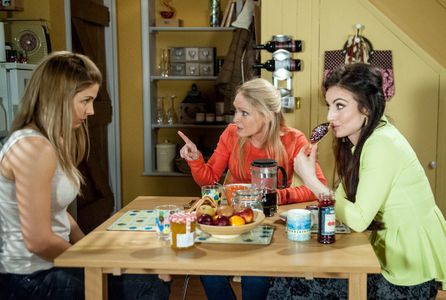