Pete is given a voucher to go scrambling by Finn. Pete apologises to Andy for overstepping the mark the previous day, but both Pete and Moira are concerned by Andy’s mood. Later, Diane asks Andy to visit Robert, but he refuses, knowing his brother is responsible for Katie’s death. Andy is desperate to vent his anger and asks Pete and Finn if he can join them scrambling. When they arrive at the activity centre, Andy is contemptuous as the instructor tries to give the safety talk. Soon Andy tears off on his motorbike as Pete urgently begins to chase after him. He ends up chasing him down a winding track. Andy then reaches a restricted track but stops suddenly when he spots a steep drop. But what about Pete who is in hot pursuit? Andy surely put Pete’s life at risk?

​Adam tells Victoria he is going to ask Rakesh what rights he has concerning Johnny’s custody. Later, Rakesh is left uncomfortable by Adam’s query, but tells him that someone from his firm will get in touch. Priya’s concerned about Adam’s legal query and warns Rakesh to do something before his lies come crashing down on him. Raskesh comes up with a plan but will it work?

Chas fears what Robert will say when he wakes up.

Priya catches Rishi searching through Jai’s pockets and they both fear his cocaine phase isn’t over. Laurel’s nervous about her first day back at work and with good reason.

Andy rushes to the edge of the rise to see what happened to Pete and sees the lake below and Pete lifeless face down.

A devastated Chrissie makes an admission to Rakesh. When he puts his arm around her she reads a little more into his kindness than he realises. She later rings him to call over to Home Farm to discuss Lawrence’s case, but has she got an ulterior motive?

Rhona and Adam call to see Vanessa, who is suspicious and thinks they are checking up on her. She is shocked by what they tell her and feels betrayed. Adam wants them to sort things and suggests she may have postnatal depression...

Doug arrives at the factory to take Laurel out, but is left rattled when he learns she had a stressful morning and left for an early lunch. He fears the worst, that she may have hit the bottle, but is he right?

Victoria and Diane are shocked when the doctor admits Robert might not wake up. Chas is left feeling guilty when Aaron is hurt by her lack of faith in his innocence. Kirin rejects Jai’s offer to pitch his cordial during a meeting with a major supermarket contract but later, when Priya asks him to keep an eye on her brother, Kirin has to pretend he has changed his mind. 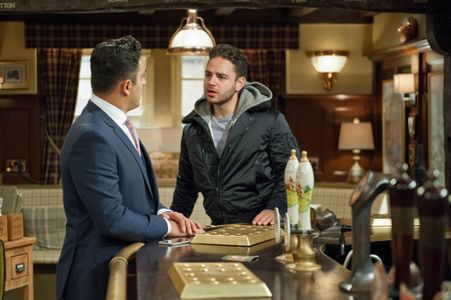