Everyone is shattered after a night spent worrying about Ged. However, in the prison, Ged is confused when Bob visits him and accuses him of trying to gas Sandy. Bob bargains with Ged to cease from harassing them. Later, Bob tells Brenda he has sorted everything but he and Harriet share a moment, leaving Bob confused. Harriet realises she has to speak to Ashley after what Bob tells her. Meanwhile, Ashley makes a confession to Laurel and later asking Harriet to accompany him to the doctor tomorrow.
​

Alicia is worried as David is still set on buying the shop back. Whilst Leyla says there must be a way of showing him Pollard can move on without him. Alicia creates a ruse to try and help Pollard but it fails when Ashley doesn’t arrive as planned. She soon is kicking herself when Pollard is fuming. Later, when David overhears wife Alicia mouthing off, he is angry, leaving her mortified.

Rishi tries to recruit Megan to help out with the presentation and she feels railroaded. When she turns up, a wired Jai refuses her help and Megan leaves as he throws money in her face. He later tells Rishi it's his business and doesn’t need Megan's help. Adam discusses baby names with Vanessa. But will Victoria agree on their choice? 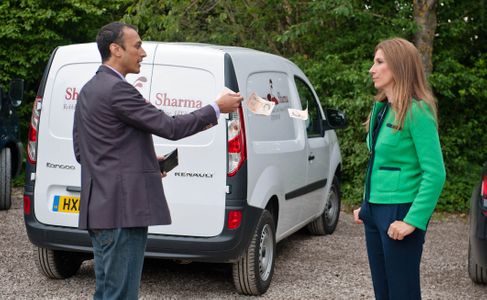 Emmerdale 8/09 - Has Ged already made an attempt on their lives?