Sam pales when he realises Jai knows Megan is pregnant. Jai roughly pushes Sam inside and slams the door behind them. Sam cowers as Jai looms over him. He figures out the baby is his and Sam lets slip Megan is planning on leaving. Sam tries to make a run for it, but ends up in a scuffle. He is pinned down, but knocks Jai out by hitting him over the head with a doorstop. Sam stands over Jai’s motionless body, and begins to panic when he can’t wake him up...

Brenda becomes ever more suspicious of Bob and shares her concerns with Harriet. She asks her to do some digging to see what they’re up to. At the hospital, Bob and Ashley sit in a waiting room. They watch, as an elderly man doesn’t recognise his own son. Ashley dreads to think this is what the future holds for him. Seeing the old man in distress makes him even more adamant he’s not telling Harriet the truth. Bob’s left feeling terrible for him. In the pub, Harriet tells Brenda she called in a favour and tracked Bob’s car to Hotten General. Brenda puts Bob under pressure when she questions them about their hospital visit. Will Bob cover got Ashley?

Paddy becomes panicked when Rhona wants Tess’ number, she wants to become a governor at the school, to help with their adoption. Ross feels he is caught between a rock and a hard place with Debbie and his mum. Sandy suspects Laurel has feelings for Ashley. 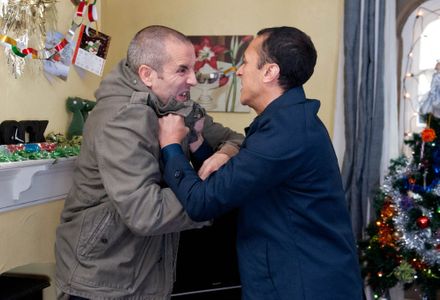 Emmerdale 27/12 – Sam is questioned about the fire