Emmerdale 19/10 - The Dingles are in despair

Chas is convinced whomever shot Robert is still out there and is now targeting her. Aaron looks like a broken man at the remand centre and Cain is left seriously worried when he alludes to killing himself. Later at the Woolpack, Diane suggests Chas smashed up the bar as a smokescreen for Aaron but Cain arrives just in time. His sister starts to break down when she hears Aaron has been charged. Cain feels the pressure to save his family but how?

Lawrence sets up a coffee with Bernice. If she doesn’t come, he will know it is over between them. Kerry stirs it up with Bernice when she compares Lawrence to Andy giving Bernice food for thought. Later on, Lawrence sits alone in the café heartbroken and devastated when he realises Bernice isn’t coming. Meanwhile, Bernice visits Andy at work and asks him if he could ever see a time when he could love her back. What will he respond? And is it really over for Lawrence and Bernice?

Finn does his part of Jimmy’s challenge but will he win the bet? Later, Finn notices a bandage on Emma’s hand and jumps to conclusions over what is going on at the Woolpack. Soon Emma is taken aback when he accuses her knowing how she feels about Chas and that she’s lied before. Diane is scared as the hospital is going to try and bring Robert out of his coma. She tells Victoria that Adam is family and it is more important than anything at the moment. Will this be food for thought for Adam and Victoria? 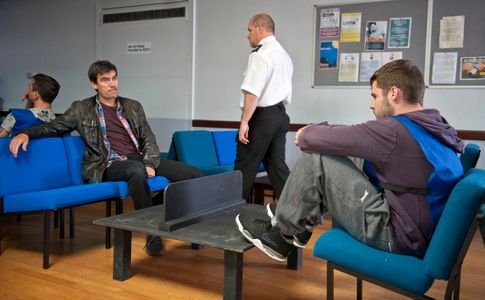