Megan’s head is in a spin, terrified Declan will find out about Charity’s fall. Jai doesn’t understand why Megan is so scared of Declan knowing the truth. Declan needs his sister at this time and asks her to cover some of his meetings. Chas visits Charity, warning her that her lies will come out. Megan struggles with the pressure and finds herself apologising to Charity once again. But with the deception having got too much for Megan she soon makes two life-changing decisions.

Robbie winds up Finn by answering Simon’s call and invites him to Home Farm. Simon arrives and Finn is panicked, wanting to tell him the truth about his identity but failing. The situation gets worse when in front of Simon, Finn is forced once again to play the part of Declan.

Donna offers Ross help with stolen cars and he is intrigued by her but has no idea what her game is. Later, Donna arrives with a list of stolen car he should avoid as the police are tracking them. But Ross smells a rat believing Donna has set him up. Can Donna get Ross to trust her before it’s too late?

Priya stays in clinic to practice breastfeeding Amba. She tells a delighted David she wants to name her Amba Metcalfe. Chas contemplates her situation with James; not happy he’s gone straight back to work. Paddy worries about being away from Rhona when he goes to America. 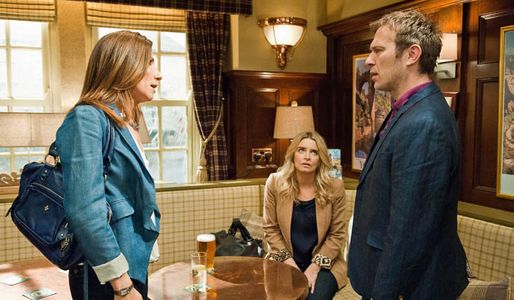