It is April’s birthday and Donna’s grateful to Marlon for organising everything. Later, Donna masks her unease as she sees Gary North and Ross is worried when Gary appears menacingly. Meanwhile, at the party Bob entertains the kids whilst Donna struggles to remain calm. She slips away from the party. Adam reels to discover Donna is involved and wants out but Donna urges him not to. Ross hands out mobiles ready for the assignment but Donna is called away to a crying April who has hurt her finger during the party. Donna tells Marlon he has to work harder to look after April without her. Marlon wants the truth to be told and Donna agrees but only once tomorrow is over with.

Charity is all dressed up for her client meeting with Harvey and although Declan says he trusts her, there is a flicker of unease as he watches her head away. On meeting Harvey, Charity’s disarmed by his good looks and charisma, will Charity be tempted and will she secure the deal?

Tracy enjoys having power over Robbi. Andy arrives home after seeing a therapist but Victoria and Katie are both pleased he is taking action. 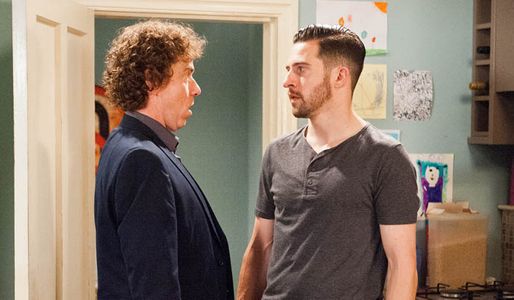