Katie is down now things are over with Andy and he is just as distraught. Meanwhile, Bernice is hopeful Andy will want her back now he’s finished with Katie but Megan soon thwarts her. Diane returns and Victoria tells her about Andy and they agree to go and see him. Later, Diane comforts Andy, knowing he’s scared of his own anger. Later, Diane talks to Katie who heads to see Andy. Can they talk things through?

Ross is anxious to hear from Gary and get the fine detail for the job. Ross tells Donna he’s made plans for them and April to all leave together when the job is over. Inwardly Donna is crushed knowing they won’t happen. Ross picks up on her hesitancy but can Donna continue to fob him off with her evasiveness.

Megan and Charity continue to spar and later when Megan is on the phone to a flirty client she sees a chance to cause trouble between Declan and Charity. Will Charity take the bait?
​
David feels clumsy around Rakesh. Leyla’s worried to hear Rakesh and Priya are coming to the pub and tries to escape, aware Rakesh knows about her affair. Donna tells Marlon she wants a quiet party for April, as it’s the last birthday she has with her. 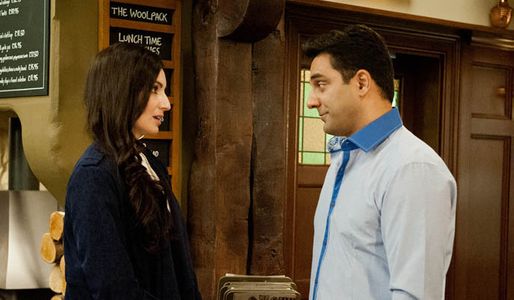