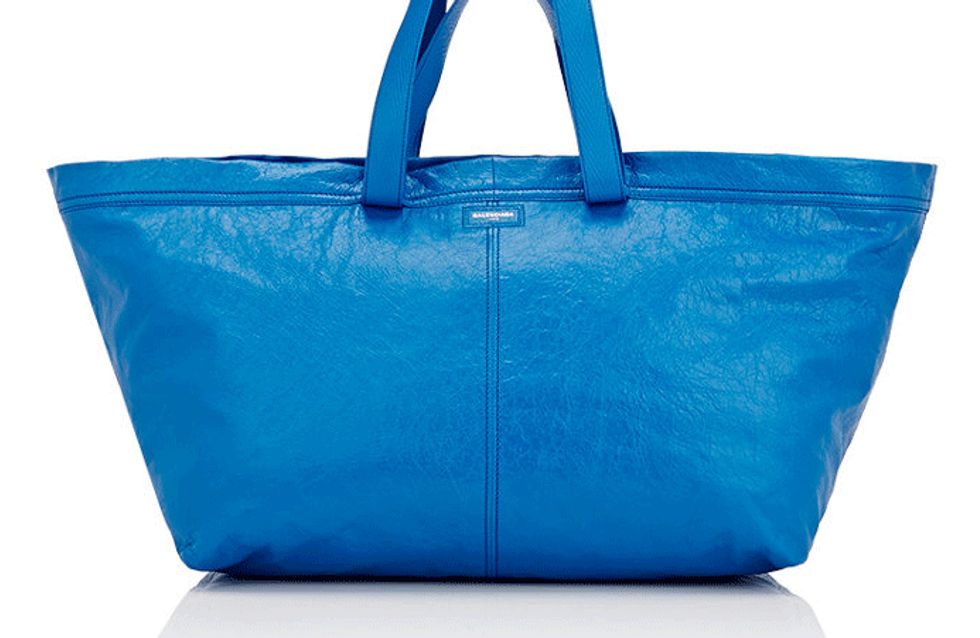 If you reckon Balenciaga's bright blue leather tote looks familiar, then you're right as it looks very similar to a certain Swedish retailer famous for its moreish meatballs: Ikea. Ah I despair. But Ikea have seen the funny side and clapped back in the best way. Well they do say imitation is the best form of flattery after all...

Designers take inspiration from all kinds of strange muses these days, as one look at Jeremy Scott’s 'Fast Food Fashion!' 2014 Ready to Wear collection, inspired by our love for McDonalds, proves. But it appears they’re really running out of ideas now if Balenciaga’s latest tote bag is anything to go by. Check it out:

If you think you’ve seen a very similar design somewhere before, then you’re damn right you have, at none other than Swedish emporium Ikea. That’s right, the luxury fashion house are selling their ‘Arena Extra Large Shopper Tote Bag’ made from 'blue wrinkled glazed leather', for a whopping £1670, and it’s almost identical to Ikea’s infamous ‘Frakta’ tote. But the main (and let's be honest key) difference? Ikea are selling theirs for a mere 40p, so it’s a teeny fraction of the price too. *Gulp*

Roomy, extremely durable, and in a bright blue hue that’s bang on trend, we’ve always been a fan of this useful staple. Now the retail giant has responded to Balenciaga's copy, by creating this lol worthy print ad, and it's safe to say they're giving zero f*cks:

Titled 'How to identify an original Ikea Frakta bag' the ad reads:

1) Shake it. If it rustles, it’s the real deal.
2) Multifunctional. It can carry hockey gear, bricks, and even water.
3) Throw it in the dirt. A true Frakta is simply rinsed off with a garden hose when dirty.
4) Fold it. Are you able to fold it to the size of a small purse? If the answer is yes, congratulations.
5) Look inside. The original has an authentic Ikea tag.
6) Price tag. Only $0.99.

*drops mic* They've also shown their sense of humour on their social media accounts too, and we're lolling:

TREND ALERT. A fashion icon can be yours for just 40p. #balenciaga https://t.co/aDtwZGxIKX pic.twitter.com/alg6kcVefe

Sorry Chrissy Teigen, we think Ikea may have just stolen your title as queen of the clap back.

What do you think of this bag? Let us know @SoFeminineUK

Topshop's Latest "Jeans" Are An Abomination To Trousers Everywhere

Pastel blue
by the editorial team

Biker girl
by the editorial team

Racy
by the editorial team

Outfit change
by the editorial team