This Blue Ikea Bag Jockstrap Will Haunt Your Dreams 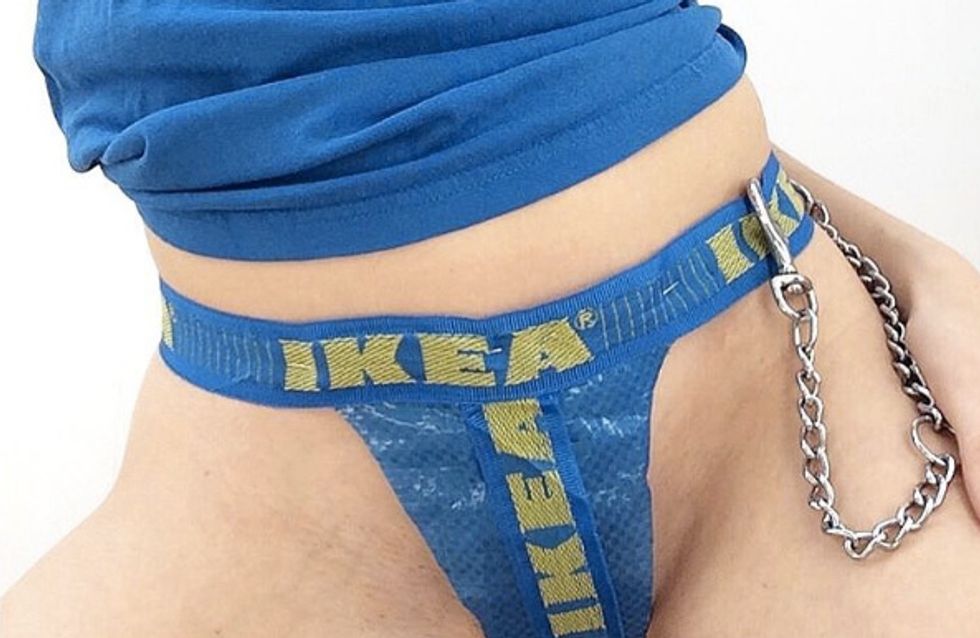 Most of us have items from Ikea spread throughout our homes, so why not have it under our clothes too? This Ikea bag jockstrap is the latest thing making the rounds on Instagram and, while we feel like it has the potential to ruin our genitals beyond repair, we're still keen to try one. And at just 40p? What a barg!

Man, Ikea really does sell everything, doesn’t it? Need an end table? Ikea has it. Need a FRAKTA blue jockstrap, Ikea has it!

OK, so maybe Ikea doesn’t actually sell branded jock straps (that won’t stop me petitioning), but that hasn’t stopped people creating them and other fashion accessories from the big blue bags they sell in-store.​

In January, Balenciaga released a new blue 'Arena Creased-Leather Holdall' from their Men's Spring collection, costing a whopping £1672, it looks suspiciously like the large FRAKTA Ikea bags which, in comparison, will cost you just 40p. Since then, people have been trolling both brands hard about the striking similarity in products - so much so that now, people are getting crafty and creating their own sartorial statement pieces using the iconic blue and yellow material.

From Ikea-branded Yeezy trainers to rain macs and - probably the fashion statement to end all fashion statements - a truly disturbing thong complete with metal chain that looks like it knows no bounds when it comes to chaffing, these Ikea-inspired items could have an actual market if the Swedish homeware experts decide to expand to cover everything in the world.

It seems like they're totally into it: "We are extremely flattered to seemingly be an inspiration for the latest catwalk designs," Stella Monteiro, Sales Leader for the UK and Ireland told The Huffington Post. "Our IKEA FRAKTA tote is one of our most iconic products which are already owned and loved by millions."

They also tweeted out some pretty epic ads:

TREND ALERT. A fashion icon can be yours for just 40p. #balenciaga https://t.co/aDtwZGxIKX pic.twitter.com/alg6kcVefe

Here’s just a few of our faves Ikea fashion moments:​

Wow, they sell everything at IKEA! #ikea #jockstrap #thong

A post shared by Laura García Gómez (@lauragarciaphotography) on May 5, 2017 at 2:50pm PDT

While we do realise these are all just parodies, we are keenly awaiting the release of the FRAKTA bralette.

Would you try out some Ikea clothing? Let us know @soFeminineUK

ASOS Have Apparently Ripped Off A Fashion Designer's Leather Jacket

​​​Topshop's Latest "Jeans" Are An Abomination To Trousers Everywhere

Pastel blue
by the editorial team

Lady Diana and Kate Middleton
by the editorial team

12. Meghan in white lace
by the editorial team

21. Kate in turquoise dress
by the editorial team

31. Kate in brown hat
by the editorial team

9. Kate in black lace
by the editorial team

32. Meghan in brown hat
by the editorial team