What a year it’s been for Kate Moss so far. First came the news that she will be spoiling our shopping socks off with another Topshop collection (she only had us waiting three years), then she did the whole Playboy spread and now she’s set to receive a Special Recognition Award at the British Fashion Awards next week. Life is looking pretty dandy for Miss Moss right now.

Kate Moss will receive the Special Recognition Award at the upcoming 2013 British Fashion Awards on Monday 2nd December to honour her 25-year-long career and influence in the fashion industry.

Not only has she proved the super model shelf-life theory all wrong with a Playboy cover at nearly 40 but she’s also demonstrated that her talents go far beyond the realms of the runway.

Last month, she assumed the role of contributing fashion editor at Vogue, swapping her cover girl career for one seriously stylish job in fashion journalism. And when it comes to designing fashion collections of her own, she's not bad either.

So just how much can a girl get done in 25 years in the business? Well, since being discovered by Storm Model Management at just 14 years-old she’s had 34 covers for British Vogue alone, countless campaigns for Alexander McQueen, Christian Dior and Chanel and walked for the likes of Louis Vuitton and Yves Saint Laurent. And that's just the tip of her fashion iceberg.

This isn’t her first big win in the British Fashion Awards. Back in 2006 she won model of the year and in 2009 took home the 'London 25' award in recognition of an individual who embodies the spirit of London and British fashion - she’s so much more than just a clotheshorse!

A global trendsetter and the world’s most prolific Vogue cover girl, is it any wonder she’s being honoured with the Special Recognition award?

Photgrapher Mario Testino says: “Kate Moss has made many people dream. And not only people that look at fashion but those that create it as well. The moment she puts on an outfit, it takes another identity. She adds personality to fashion and I, personally, can never get enough of her.” We second that! Congrats Mossy.

The Spice Girl come fashion designer has been nominated for the Red Carpet Award - which gives recognition to a British designer who is creating global awareness of their designs in the media - and the Brand Of The Year Award. Good luck Posh!

Is Kate Moss a worthy winner? Tweet us your thoughts @sofeminineuk! 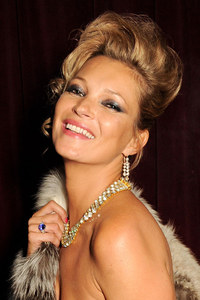