It's the fashion news we've all been waiting for, Alexa Chung has finally decided to let her style credentials loose on the world with her first ever clothing line set to debut this year. And breathe.The fashion theme has yet to be decided but one thing's for sure, they'll be no Miley Cyrus PVC faux pas entering the mix. Phew.

Fashion favourite Alexa Chung let slip that 2014 was going to be her year when she announced her hope to debut her first ever clothing line. How about that for a New Year’s resolution!

While the theme is still unsure, the Chungster is going to have more time on her hands to sit down and get sketching since she's just finished her TV presenting stint with Fuse News.

Speaking to Fashionista.com at the launch of her Eyeko make-up collaboration, Miss Chung revealed plans for her own label have been drafted for this year.

She said: "That's (2014) going to be the first opportunity where I haven't had a nine-to-five job… I've kind of been doing Eyeko, I wrote a book, I did Fuse every day, and various other design gigs and DJing. So this will be the first time to actually sort of sit down and think about it… I'm going to get it off the ground hopefully in 2014." 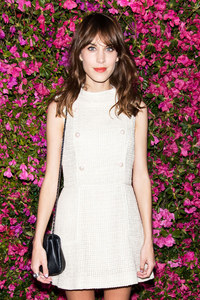 The style and theme of her collection remains to be told but she knows exactly what she doesn't want and that's Miley Cyrus couture. She said: "It's like a will it/won't it situation, I'm on the edge of my seat every time I watch her spread her legs! I'm like 'Ooh! Ooh!' It's too much for my anxiety."

Take it we won't be seeing any eye-watering leotards or butt-skimming hot pants then!

So what can we expect from the Chungster's very own fashion label? We're thinking classic go-to staples. Your evergreen items: distressed denim dungarees, collared dresses, fedora hats and navy must-haves.

Alexa's made no secret of her design aspirations, admitting that her own label would be everything she'd ever dreamed of. We second that.

Are you excited for Alexa's first ever fashion drop? Tweet us @sofeminineUK

Lareese Craig
…
Essentials
From hair ideas to outifts, look no further for your daily inspiration