8 Reasons The Chanel SS16 Show Was Everything

by Lareese Craig Published on 7 October 2015 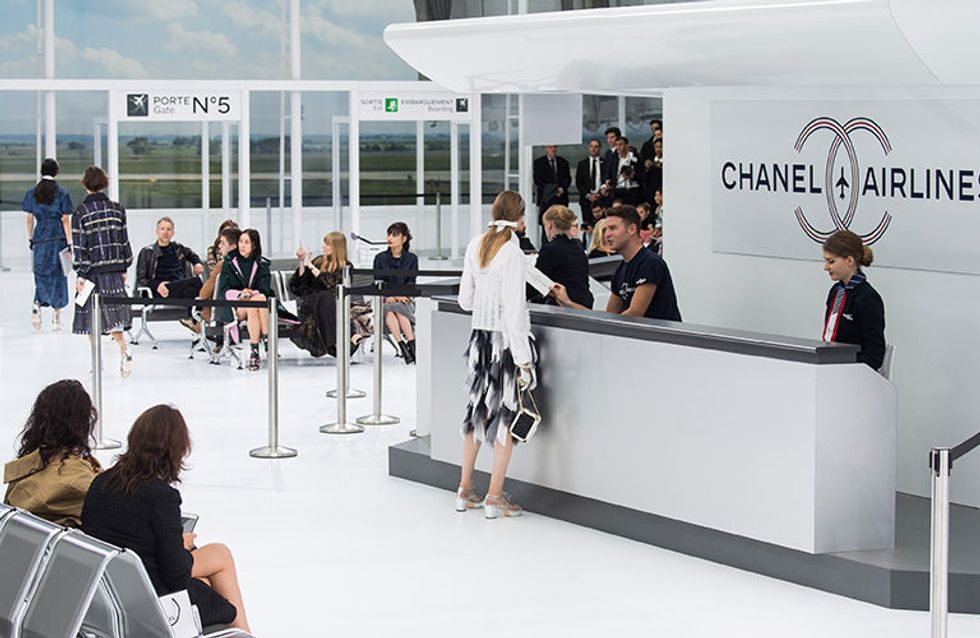 It's common knowledge that Karl Lagerfeld, King Karl, the legend with the grey ponytail, yeah HIM, is the best at Paris Fashion Week. Was he about to let his couture crown slip for SS16? Was he heck. Here's why the Chanel show was fly so fly.

King Karl's done it again. Just when we thought he'd hit his peak with his supermarket sweep and feminist rally, he goes and creates his own effing runway. Literally.

The Chanel show took off with aplomb as models checked in their custom made luggage before boarding the catwalk. And it was the chicest god damn thing we've ever seen.

Here's why Chanel SS16 has given us the best jet lag we've ever had.

1. It had its very own departure lounge

IT HAD KIOSKS AND EVERYTHING. Only a guy with a pony-tail and intersecting Cs for eyes could get away with that. Why do you think he wears black-out sunnies all the time hmmmm? We're on to you.

Because only men dressed in velveteen suits, blessed with impeccable hair should carry ya bags.

3. The flight footwear was insane

4. Pants and skirts together got permission to land

We all know how Karl feels about sweatpants but skirts over pants? That's anything but a sign of defeat.

When it comes to shiny aviators Dior did good but Chanel did it better.

6. The models had superhero makeup

If they weren't wearing glasses, they were wearing makeup that looked like glasses. Brilliant.

7. Kendall Jenner was there

She didn't walk. But she did bring out an adorable child AKA the Chanel godson, real name Hudson Kroenig.

Loving the Chanel take on airport chic? Tweet us @sofeminineUK!

The Hottest Trends To Come Out Of London Fashion Week SS16

Like us on Facebook!
You might also like
Donatella Versace: the designer, with friends, who revolutionised the fashion world
by the editorial team
The brands that celebrate diversity and break the codes of beauty
by Amy Denman
Kylie Jenner's fashion highlights
by Amy Denman
Victoria Beckham's best looks: copy the style of the 'Posh Spice'
by the editorial team
Models who break the standards of beauty
by Charlotte Hoddge
Iconic Oscar dresses from the year you were born
by Charlotte Hoddge
The most daring dresses worn at the Golden Globe Awards
by Charlotte Hoddge
Meghan Markles best fashion moments throughout the years
by Charlotte Hoddge
The Emmy Awards 2017: Our Round Up Of The Best Outfits
by Lareese Craig
Jennifer Lawrence Style: Her Best Outfits To Date
by Lareese Craig