Confessions: The WORST Gifts You've Gotten From Your Man On Christmas

by Dagney Pruner Published on 2 December 2014 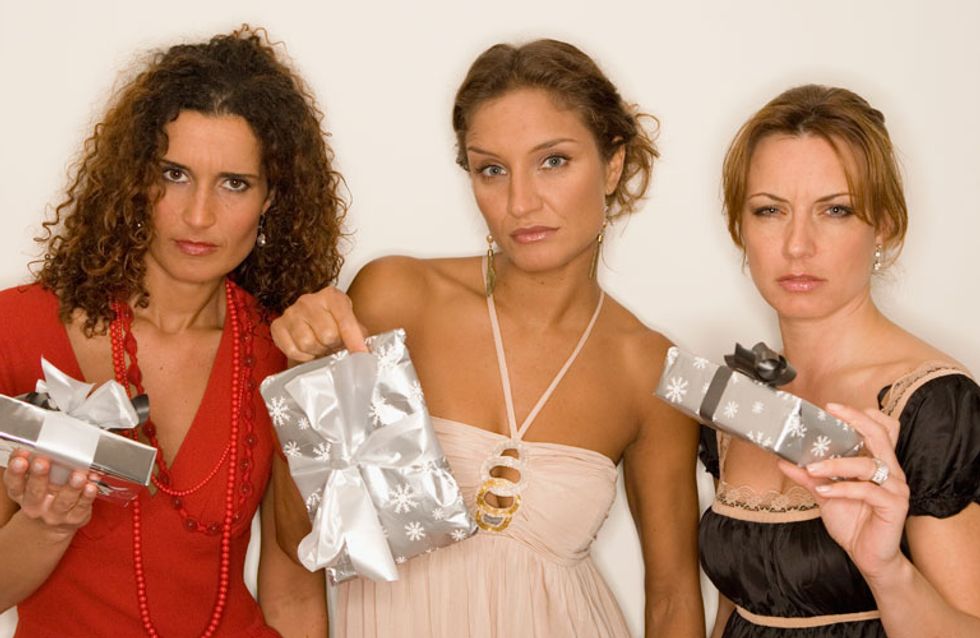 We know their heart is usually in the right place, but let's face it, sometimes our significant others give us the WORST gifts during the holiday season. We want to give them an A for effort, but some of these gifts are so cringeworthy that they are going to get memorialised on this list of WTF-were-they-thinking gifts from our (former) lovers.

We decided to poll some women and have them tell us the worst gifts they have ever gotten from their man. These gifts go from bad to worse, let's just hope these men learn from their mistakes. For a 10-step guide on how to avoid these mistakes, check them out here.

"So this was a surprise Christmas gift. My boyfriend at the time had made me a hand made Christmas card with a nice drawing on the front. Inside the card was some kind of packet, so when I opened it up I found a clear bag full of his beard clippings. It was disgusting. Apparently it was supposed to be a sentimental gift so I could remember the time he broke his arm and he couldn't shave for a month and a half. I was horrified. It was only moments before I threw it in the bin and a bit later on he followed the same fate!"

"I am not much of a fashionista but I was in desperate need of a new wallet so I hinted to my man that I really liked this Tory Burch wallet. Well he decided to order a FAKE off of eBay the day before Christmas so it showed up two weeks late. The zipper broke the first time I opened it. We broke up a few months later."

The don't judge a book by its cover

"A book on plastic surgery that was handed to me in a Marc Jacobs shopping bag. So, as you can imagine I was VERY disappointed. Especially when I spent £300 on a gift for him."

"My brother gave his ex some pyjamas right before he broke up with her. She got him a designer wallet. Ouch."

The pay it forward

"So my ex gave me cooking lessons one time. But he never set the date for us to actually go to a class (and therefore hadn't paid for it yet). And then we broke up so I never even got a present from him. AND I had given him like a £200 sleek video camera thing that he was obsessed with. So that was irksome."

"It was our first Christmas together and he got me a toolkit. Seriously? I've never used a hammer in my life."

"My high school boyfriend tried to give me the heart necklace that he had given to my best friend before, and she had given it back to him after they broke up...smooth?"

The "are you trying to tell me something?"

"Cotton, mid-shin-high socks. from someone I was hooking up with... didn't make me want to jump in bed."

"A pig pillow pet, a book on how to run a marathon, parrot earrings and 3 straw bracelets from Costa Rica...who puts those things together?"

"One year my boyfriend got me and his mum THE EXACT SAME THING. A really nice candle set. I couldn't even think about unpacking what Freud would say about that."

"My boyfriend bought me two guinea pigs as a gift thinking it would be great because I had recently said I really liked taking care of my neighbour's pets, but then I guess the morning before he was going to give them to me I mentioned how much I wanted a hamster so he had messed up and bought me the wrong pet. To add insult to injury, you're also meant to leave them in your home so they get used to it before you play with them and unfortunately they were around his house for the 'settle in' period when he and his friends had been constantly snuggling them, so basically moving to my house made them go from cute docile little baby guinea pigs to horrible biting monstrosity's who wouldn't let you hold them and were basically a f*cking nightmare."

The nowhere to go but up

"My dad gave my mum a California Raisin Doll with bendy arms for their first anniversary... he is a real charmer!"

The chicken of the sea

"Granted this was in high school, but I received the Jessica Simpson CD that 'had just just come out that week'...cool?"

The fake it till you break it

"My pet peeve is anything cheap that is made to look expensive. Once got a silver chain necklace with a pendant, the chain broke by New Year's Eve I remember being pissed because I got the perfect outfit for the necklace and couldn't wear it."

Do you have a gift that is so bad it could make this list? Tweet at us @sofeminineUK!

10 Foolproof Steps To Getting Your Girl The Perfect Gift

Follow us on Instagram!
You might also like
The brands that celebrate diversity and break the codes of beauty
by Amy Denman
Lady Diana VS Kate Middleton: the looks in comparison
by the editorial team
The most daring dresses worn at the Golden Globe Awards
by Charlotte Hoddge
The massive rose gold trend
by Charlotte Hoddge
Christmas gifts: unique presents for everyone
by Charlotte Hoddge
The Emmy Awards 2017: Our Round Up Of The Best Outfits
by Lareese Craig
Jennifer Lawrence Style: Her Best Outfits To Date
by Lareese Craig
Winnie Harlow: Model, Activist & All Round Babe
by Lareese Craig
No Knickers, No Problem: Celebrities Not Wearing Underwear
by Helen Turnbull
Like Mother, Like Daughter! Princess Charlotte's Style Evolution
by Helen Turnbull