by Lareese Craig Published on 29 September 2015 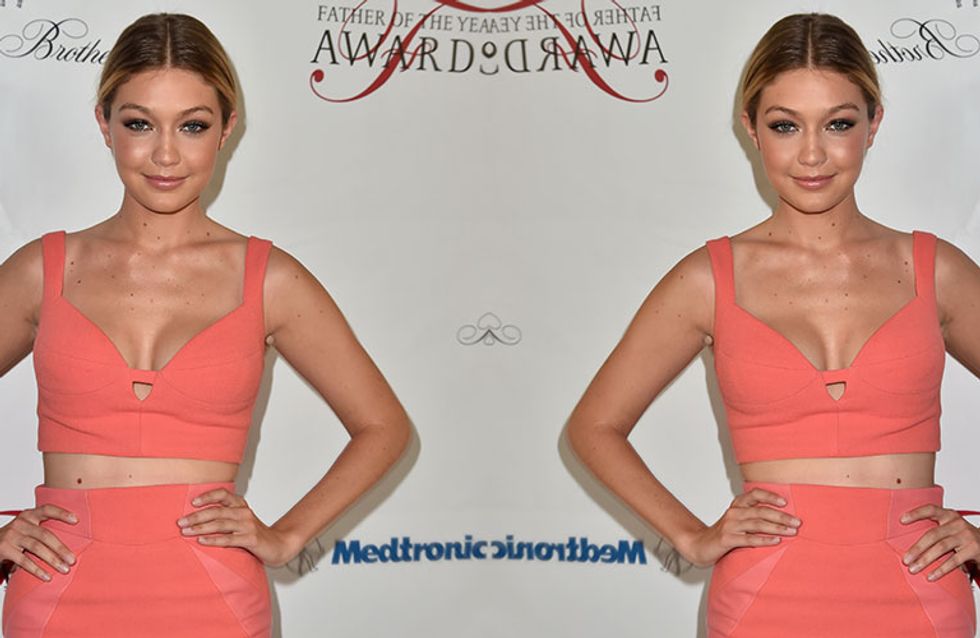 We gotta whole lot of love for Gigi Hadid and a lot of raging hate for body shaming trolls right about now. She shut down her haters with one epic Instagram post and now we can't stop fist pumping, well they don't call her the social media model for nothing. Here's how to tell a collective bunch of arseholes that they're arseholes in the best way ever.

She's been the face of Tom Ford's fragrance, featured in Taylor's video, walked for Versace but apparently being one of the world's most successful super models means internet trolls will be d*cks to you.

In an open letter on her Instagram account, the 20-year-old model hit back at the negative comments she's received recently concerning her weight.

Admitting the criticism had got to her she said, "Yes, judgement on social media comes from people who, 99% of the time, have no idea what they're talking about, but I'm human, and I'm not going to lie, I did let the negativity get to me a little.."

But rather than let the haters bring her down, she went on to say she's not changing for anyone.
​
"No, I don't have the same body type as the other models in shows. No, I don't think I'm the best at any given show. Yes, I want a unique walk but also know I have to improve. No, I'm not the first or last model of my type in this industry. You can make up all the reasons you think I am where I am, but really, I'm a hard worker that's confident in myself, one that came at a time where the fashion industry was ready for a change.

"I'm just doing my job. I represent a body image that wasn't accepted in high-fashion before, and I'm very lucky to be supported by the designers, stylists, and editors that I am: ones that know this is fashion, it's art; it can never stay the same. It's 2015. But if you're not one of those people, don't take your anger out on me."

And then it got really powerful...

"Yes, I have boobs, I have abs, I have a butt, I have thighs, but I'm not asking for special treatment. I'm fitting into the sample sizes. Your mean comments don't make me want to change my body, they don't make me want to say no to the designers that ask me to be in their shows, and they definitely don't the designers opinions of me. If they want me to be in their show, I'm in it; if they don't, I'm not. That's just how it is and how it will be.

"If you don't like it, don't follow me, don't watch me, cause I'm not going anywhere. If I didn't have the body I do, I wouldn't have the career that I do. I love that I can be sexy. I'm proud of it."

Talking to Vogue about the reasons why she decided to comment publicly she said: "These are obviously also people that don’t think of you as an actual human with actual feelings, which I think is a really big problem right now in social media."

Celebrity pals were quick to jump to her defence with Millie Mackintosh, Tyra Banks and Kris Jenner all wading in to show their support.

“I honestly broke down, I started crying at the multiple text messages I got today from everyone, from Victoria’s Secret models to plus-size models to people like Tyra Banks, who posted [the Instagram letter] and who is someone I’ve looked up to for my entire life. Those are the people who really touched me because I know those are the people who are the most emotionally affected within the fashion industry by this type of criticism.”

As sad as it is that Gigi has to defend her body, her epic rant was SO on point!

Do you agree with Gigi, should internet trolls just DO ONE? Tweet us @sofeminineUK!

Why Putting Yourself First Is The Best Thing You'll Ever Do

Donatella Versace and Gigi Hadid
by the editorial team

Lady Diana and Kate Middleton
by the editorial team

Emily Bador
by the editorial team

Moffy Hardy
by the editorial team