Home / Fashion / Fashion News / Karl Lagerfeld Launched A Feminist Protest On The Chanel Spring 2015 Runway. But Was It Effective?

Karl Lagerfeld Launched A Feminist Protest On The Chanel Spring 2015 Runway. But Was It Effective?

by Cliche Wynter Published on 1 October 2014 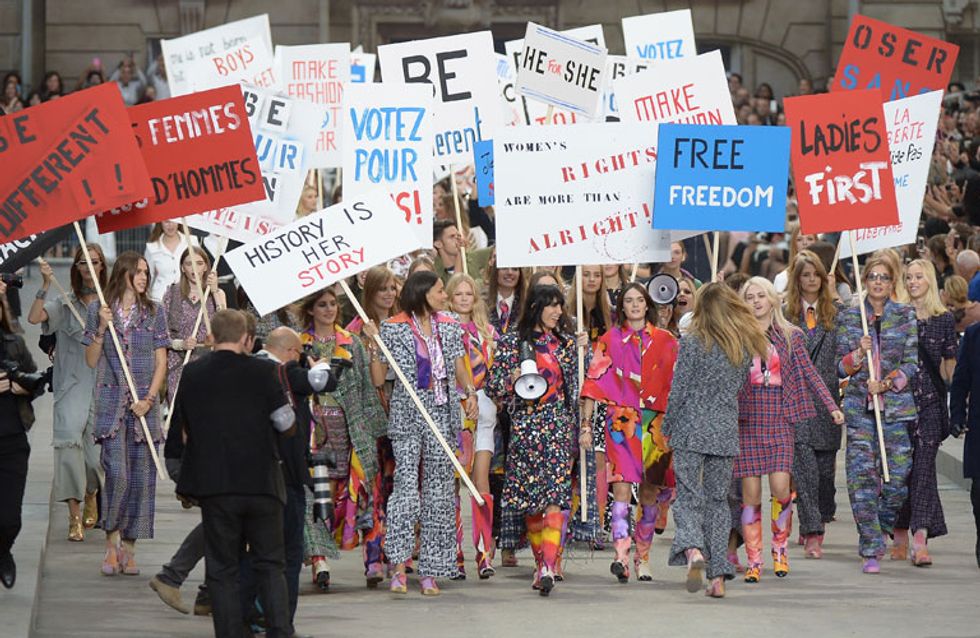 At today's Chanel show, Karl Lagerfeld outfitted what can arguably be described as the best dressed set of protesters (aka gorgeous models) of all time, then sent them down the runway with signs that read "He For She," "Ladies First", etc. But how impactful was his pro-feminism message?

In case you were blissfully unaware, feminism is having a serious moment. First Beyoncé punctuated her powerful 2014 MTV VMA performance with the word "Feminist" lit up in bold letters behind her famous silhouette. Then Emma Watson gave a rousing speech on the movement at the UN. Chanel has now joined the conversation by launching a pro-woman protest at their Spring 2015 show. Three's a trend, right?

While you'd expect me, a strong supporter of women's equal rights and an avid lover of fashion, to jump for joy at the sight, I was left with mixed emotions. Of course it was freaking amazing to see Chanel and Karl Lagerfeld endorsing such an important message. But as Rhiannon Lucy Cosslett of The Guardian reminded me, this is a man who once fat-shamed Adele. So as a result, his fresh off the runway pro-feminism message comes across a little trite and disingenuous. For goodness' sake, models waved signs that read "Boys Should Get Pregnant Too" and "Make Fashion Not War." I mean, really?

I can't say it's entirely surprising. Fashion has a tendency to soak up whatever is hot at the moment. And right now, being proactive is all the rage. It was only a matter of time before we saw high-end designers taking advantage note and reinterpreting it for the stylish masses.

Truthfully, appropriation of any sort leaves a sour taste in my mouth. But if it's one thing we can all be thankful for, it's that Chanel's Spring 2015 show, at the very least, continued the conversation on gender equality.

What are your thoughts? Are you loving Karl Lagerfeld's statement or does it seem gimmicky? Tweet us @sofeminineUK