by Ursula Dewey Published on 9 January 2014 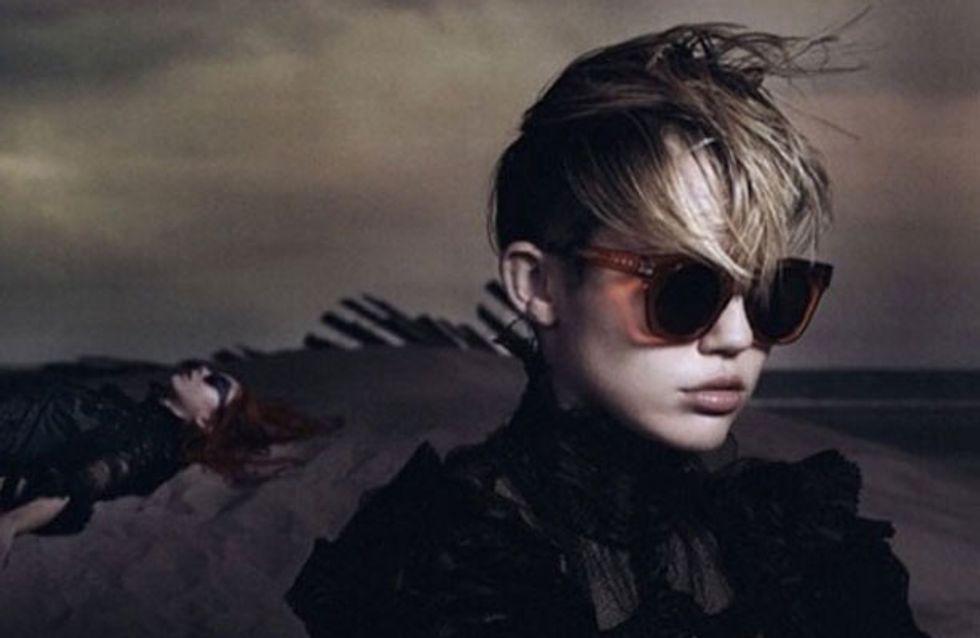 Miley Cyrus is no stranger to controversial photo shoots, and compared to her perverse pics with shoot 'n' shock photographer Tim Walker, Miley's latest work in front of the camera is verging on the tame (gasp!). The Wrecking Ball singer is now the face and body of a new Marc Jacobs campaign and we've got the pics!

Miley is our go-to girl whenever we want to tisk or tut at the audacity of her poses, videos, dance moves or outfits, but it looks like a case of bad-girl-gone-good with her latest photos for the Marc Jacob's SS14 fashion campaign.

Clad in a ruffled ornate jacket, dark Bordeaux shorts and a pair of monochrome trainers, the starlet is almost unrecognisable.

Pictured sitting on what looks like the Moon, pouting and pensive as a girl lies lifeless beside her, Miley looks miles away from her fun-girl persona.

Shot by David Sims and Katie Grand, the post-apocalyptic scene is all kinds of moody and morose as Miley delivers an androgynous photo shoot - and there's not a waggling tongue in sight!

The former Disney star sports slightly darker windswept tresses and a sophisticated jet black mani to match but there's still an air of quiet Miley rebellion as her anchor tattoo remains un-photoshopped. Clearly Marc's a fan of her rough and raw edge.

Talking about his inspiration behind the dystopic set, Marc Jacobs told WWD: "We wanted this beach with girls kind of sulky and broody, and we thought it would be cool if it was Miley with what could be two friends, feeling distant and quite dark."

She's made no secret of her love for MJ in the past calling him her 'fashion mentor' and crediting him as the man behind her style makeover so we should have seen this campaign coming, but after rumours of being cut from Vogue magazine and Juergen Teller refusing to photograph her, why did Mr Jacobs choose Miley as his moody muse?

The American fashion designer added: "We all just love her and her entire being, her energy, her talent, her intelligence, everything. There’s nothing I don’t like about her. She is just genuine and very natural." Looks like the feeling's mutual.

After she was seen wearing a rather cool pro-gay marriage T-shirt this week we reckon Miley's got a new year's fashion resolution, less of the leotards and more of the fully clothed. How long can she keep this up?

We've never been so happy to see a gloomy-looking celeb but what are your thoughts on a very modest looking Miley? Tweet us @sofeminineUK