Red Carpet Winners From Audrey To J-Law! The Best Oscar Dresses Of All Time

Never mind the best animated feature film and best picture, we're holding our very own awards ceremony entirely for the best dresses. That's right. And the nominees for the best Oscar dress of all time are...

With the Academy Awards fast approaching it's only fair to pay heed to the best haute couture to have ever walked the red carpet. True, The Oscars may well be about honouring achievements in the film industry but that golden statue's got nothing on these bad ass frocks. We know which one we'd rather take home...

After scooping the award for best leading role in Roman Holiday, Audrey dubbed this frock her lucky dress. It was the first time Auds had ever worn Givenchy but she soon became his favourite muse.

Actress and style icon Grace Kelly wore a cool blue gown by Edith Head to receive the Best Actress Oscar for The Country Girl. Priced at £2400 for the fabric alone, it was the most expensive dress the Oscars (and the 50s) had ever seen! Nice work Kelly.

Last year it was the bespoke Dior gown that got everyone talking. Nipped in at the waist and perfectly flouncy from the hips down. As if the three foot train wasn't enough drama for one night, J-Law then proceeded to hug/trip up the stairs as she collected her award. Apparently we're still not over that.

All about the dress

It's not often you see a star posing empty handed on the red carpet but Rooney Mara's striking Givenchy gown was all she needed to win our hearts. Throw in jet black bangs and a deep red lip. Simply sublime.

There's a fine line between showing a little flesh and 'hello, too much information' but Halle Berry found a happy medium. With a sprinkling of Elie Saab flowers and a plum skirt her designer embroidery ensured she was the right side of risqué.

Let's face it Anne Hathaway rarely puts a foot wrong when it comes to her Oscar's wardrobe and this pearly pink Prada number was one of our faves. Fit for a princess and set off with a string of jewels. Eat your heart out stuff.

Mila Kunis' parma violet Elie Saab dress was to d-i-e for. Tiers of lavender chiffon and lace detailing ensured she was the centre of attention all night long. Girl crush? Obviously.

Never shy of a leg flash or a statement neckline, Angelina Jolie took the plunge in a white satin gown by Marc Bouwer back in 2004. The pièce de résistance? A matching wrap which she draped across her wrists for her grand entrance.

The Oscars wouldn't be the same without the aisle-blocking frocks and Penelope Cruz was on the money with her feathered Versace creation. It's elaborate, it's too much and it's bigger than big but we wouldn't change a stitch.

As a general rule the Hollywood elite usually avoid the red on red situation but when it works it really works. Just look at Michelle Williams working her ruby peplum. Louis Vuitton never gets it wrong.

Got a fave Oscar dress you wanna gush about? Join the fashion talk and tweet us @sofeminineUK

Check out many more fashion favourites and OMG Oscar dress moments in the gallery below! 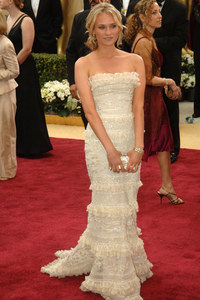