Rihanna kicks off November with an amazing new spread for the December issue of ELLE . She also makes a grand return to Instagram after a near six month hiatus. Happy Holidays, everyone!

Is a new Rihanna era upon us? After BadGalRiRi was kicked off Instagram for posting topless pics, she finally made a grand return to the popular photo-sharing app over the weekend. The internet collectively rejoiced as the shade queen returned to her rightful throne.

As if that wasn't enough to get her fans excited, a brand new spread for ELLE US was unveiled early Monday morning, signalling the superstar might just have a few more surprises up her sleeve. Could this all be the start of a major marketing campaign for RiRi's forthcoming album? Only time will tell.

But press tactics aside, it's hard to deny that Rihanna always makes for a great cover subject. The girl is stunning and hasn't yet met a camera that doesn't love her flawless face. In her most recent spread,the star is stripped back to basics. Weaves and wigs are tossed aside as she rocks her natural hair and minimal makeup (the biggest statement being a bold lip). The result? Something undeniably refreshing.

Check out all the images from her spread here: 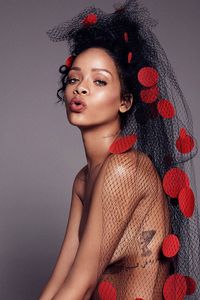 Are you feeling Rihanna's new spread? Tweet us @sofeminineUK

This article was written by Cliché Wynter. Follow her @CalamityCliche.

How To Dress Sexy: The Style Rules To Stick With

Beyonce Style File: Her Fashion Through The Years

The Best Looks From The Grammys 2016 Red Carpet