American Apparel, they're always game for a bit of boundary pushing aren't they? Whether that's adding pubes to their mannequins, coming under fire for pervy (aka porny) advertising, or using a 62-year-old for their latest lingerie campaign. And that's exactly what they've just done to push their new collection.

Clad in nothing more than see-through lace, a bandeau bra and a slick of red lipstick, Jacky proves American Apparel is pretty much the only thing to be seen in, no matter what your age. ​

The campaign shots show Jacky flexing her legs and sprawling on the floor of a whiter than white warehouse somewhere. The shots are accompanied by the tag line, "Sexy has no expiration date" - and not surprisingly has had a ton of likes on Facebook and Instagram. 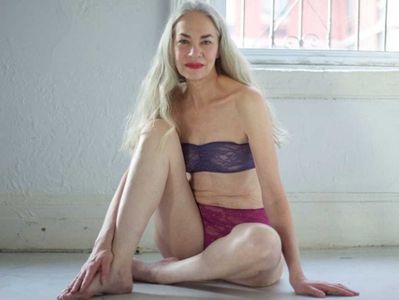 Jacky has already been involved with previous American Apparel campaigns, in fact she first put her face on the brand in 2012 when she starred in shots for their 'Advanced Basics' campaign but in those pics she was fully clothed. This time she lets it all hang out and shows off her banging body - giving Christie Brinkley a run for her money.

Margaux Rouche
…
From hair ideas to outifts, look no further for your daily inspiration

Like us on Facebook!
You might also like
Donatella Versace: the designer, with friends, who revolutionised the fashion world
by Ayla Soguksu
The brands that celebrate diversity and break the codes of beauty
by Amy Denman
Victoria Beckham's best looks: copy the style of the 'Posh Spice'
by Ayla Soguksu
Lady Diana VS Kate Middleton: the looks in comparison
by Ayla Soguksu
Iconic Oscar dresses from the year you were born
by Charlotte Hoddge
When Runway Models Fall On The Catwalk!
by the editorial team
Jennifer Lawrence Style: Her Best Outfits To Date
by Lareese Craig
Winnie Harlow: Model, Activist & All Round Babe
by Lareese Craig
No Knickers, No Problem: Celebrities Not Wearing Underwear
by Helen Turnbull
Like Mother, Like Daughter! Princess Charlotte's Style Evolution
by Helen Turnbull