The Brit Awards 2014: Fashion, Frocks and Females We're Obsessed With

After rocking out to Beyonce's dazzling rendition of XO and swooning over Harry Styles and his cheeky toilet antics there's really only one thing left to do and that's to suss out the best dressed talent from the sack-the-stylist ensembles. From floor length sequins to canary coloured Prada and ethereal Vivienne Westwood here's a low down of the dresses we wanna own, like right now.

Miss Ora took a leaf out of Queen Elizabeth's fashion book and opted for a lively lemon hue (very British). What better way to turn heads than in a sunny yellow Prada dress with a scoop-drop neckline? Calvin Harris is one very lucky man indeed.

You can always rely on a certain Scherzinger to inject a little leather into the mix. Showing off her enviable washboard abs, Nicole amped up the red carpet proceedings with a cleavage hugging choker top. No wonder Lewis Hamilton wanted his Pussycat Doll back for good.

When you've got pins that could rule the world you may as well show them off. Rosie HW stepped out in a futuristic Saint Laurent mini and looked a total ten as she did it.

Fit for a princess

Ellie Goulding gushed to Vogue about her princess Vivienne Westwood frock, she said: “It’s the best thing I’ve ever worn" and who are we to disagree.

Sisters are doing it for themselves

The lovely Kylie Minogue opted for an 'unwrap me' William Wilde LBD whilst sister Dannii went for a J’Aton Couture lace number. We'd love to say Brits do it best but in this case the Aussies really did come up trumps. We heart these two.

It wouldn't be an award ceremony without Bey belting the hell outta the joint and that she did. Ok, so there was no wet look hair, raunchy routine or Jay Z this time round but are we bothered? All that mattered was THAT dress! It only had 400,000 crystals on it but it's no big deal, really it's not. 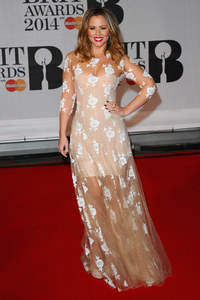 Whose outfit was rocking your fashion radar at last night's BRIT Awards? Tweet us @sofeminineUK