There's a thin line between fashion and cultural appropriation, and Valentino seems to have crossed that line. The fashion brand has landed itself right in the middle of a huge social media controversy with its Paris Fashion Week runway show and you can kind of understand why.

The show, which was inspired 'by Africa' has left many people pissed off, mainly due to the fact that only 8 of the 91 models were black women... 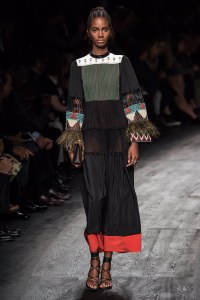 While many people agree that the clothes are beautiful, it's hard to ignore the glaring contrast between the theme and models. ​Oh and to add to the cultural appropriation the white models are sporting cornrows. The backlash was clearly predictable, so it's baffling to think that no one at the fashion house thought it through. Do better next time Valentino!

That's very cute of #Valentino to pay homage to the African culture for the new collection, but ummm...where were the african models?

Valentino's S/S '16 show was inspired by "tribal Africa", yet only 8 out the of 87 models were black. Somehow don't see that adding up

perhaps cornrows on mostly white models could've been the first red flag to anyone with eyes on the valentino team.

What do you think, is it fashion or cultural appropriation? ​Tweet us @sofeminineUK

This article was written by Tolani Shoneye. Tweet her ​@tolly_t

International Day Of The Girl: Stand Up For Girls' Rights

Tolani Shoneye
…
From hair ideas to outifts, look no further for your daily inspiration