Victoria Beckham - British style icon, fashion designer and now Vogue Paris editor, that woman certainly knows how to conquer the fashion world. She's ticked another to-do off her bucket list now as she's landed herself in the editor's chair over at Vogue Paris HQ. VB guest edited the Christmas issue and filled it with her fave festive memories, her children's drawings and family photos. This you have to see!

As if Victoria Beckham wasn't busy enough organising fashion shows, running her label and being a mother to four, she's now heading up the Christmas issue of Vogue Paris.

The British style maven has landed the job as the guest editor of Vogue Paris for their December issue. Can anything stand in the way of Posh and fashion world domination? Nuh-uh.

Her and David look totally besotted on the front page, shot by iconic photographers Inez & Vinoodh. Staring into each other's eyes, Victoria's arms wrapped around her doting husband's neck, this snap defo beats sending out a couple's Christmas card.

Victoria wears a classic LBD and a voluminous lob whilst David smoulders in his tuxedo and stubble combo. If ever you need a reminder of just how good-looking they are, then here it is!

Make-up wise, Victoria opts for a gorgeous nude lip, perfectly lined brows and feline flicks, all of which are polished off with her bouncy brunette locks.

And Victoria's not the only one trying the other side of the creative experience. Back in October it was revealed that Kate Moss would play contributing fashion editor for British Vogue for a forthcoming Spring issue.

In the Christmas issue of Vogue Paris we get to see a day in the life of VB, her fave Paris hotspots, behind the scenes at her SS14 shows and London lunch dates with Marc Jacobs and Co. - oh to have a BFF list like hers.

Editor-in-chief of Vogue Paris, Emmanuelle Alt writes inside the mag: "We entrusted the editor's chair for this issue to a woman who revealed herself to be the absolute opposite of her public image while we were working together. Spontaneous and full of humor, she's modest, with a healthy dose of ambition. And like all those who are truly passionate about what they do, Victoria is a perfectionist."

Candid interviews and exclusive Posh and Bex photos... how could you resist?

Will you be shipping in your copy of Vogue Paris? We know we will be! Tweet us @sofeminineUK 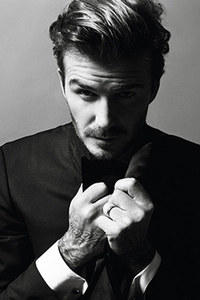 Lareese Craig
…
Essentials
For all the best videos, memes and shareable news!

Christmas gifts: unique presents for everyone