There's one NYFW show we were all tuning in for this weekend and it certainly lived up to expectations. There wasn't a hem or a Harper out of place at Victoria Beckham AW14 and the CLOTHES - they're better than ever. Who would have thought that the bodycon wearing Posh Spice of the 90s would be leading the way for loose tailoring and oversized slouch? If you're fashionably late on the VB fashion week scene here's what you missed.

Ok so the pink notch lapel M&S number was the talk of the season last year but VB's androgynous plaid wool coat is 2014's bigger and better version. We're dubbing this the Boss coat because the second you put it on you'll instantly mean business.

Harper being adorable as per

This photo gave the sofeminine office something to coo/point and laugh at this Monday morning. Little Harper got caught in an opportune moment picking her nose right on the front row. Well, you can't always be on best camera-behaviour! Possibly the best photo in the history of NYFW.

We love a good selfie and we love them even more when they include an eyeful of David Beckham and his brood. He mastered the group selfie on the front row with Brooklyn, Romeo, Cruz, Harper and and (honorary aunty) Anna Wintour. That's one fashionable family. Note Harper's modest hand on chest pose, "Who me? You wanna take a photo of me?" Love her.

Romeo's clearly been doing his fashion homework. He turned up to his mum's show in a khaki trench coat a la Harry Styles. He's his mother's son!

Who said Mrs Beckham doesn't have a sense of humour? When we spotted this turtle neck on the runway we did have a quiet LOL to ourselves. It's not officially meant to look like a moustache but it kinda does right?

After every Victoria Beckham fashion show there's all kinds of praise on Twitter. It's enough to make all that hard work feel worth it eh Vicky? Except that Harper's nose picking started stealing all the focus from the frocks!

Bravo #VictoriaBeckham - the kind of clean cuts I'd love in my wardrobe #nyfw #fashiondirectorscut http://t.co/agGhLvHjmS

You know that bit at the end of the show when the designer pops their head out sheepishly from behind the stage, waits awkwardly for the applause, bows then darts off in embarrassment? VB didn't do that. Yes she popped her head out, yet she was applauded and yes she looked awesome.

And the biggest OMG moment of them all? The jaw-on-the-floor beauty of the collection! Here it is in all its glory: 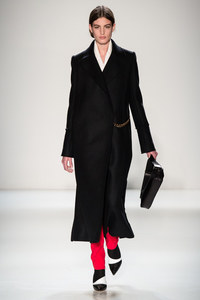 What was your fave moment from VB's NYFW show? Tweet us @sofeminineUK