17 Influential Ladies Who Redefined Hair Trends For Women Of Colour

by the editorial team Published on 28 October 2015 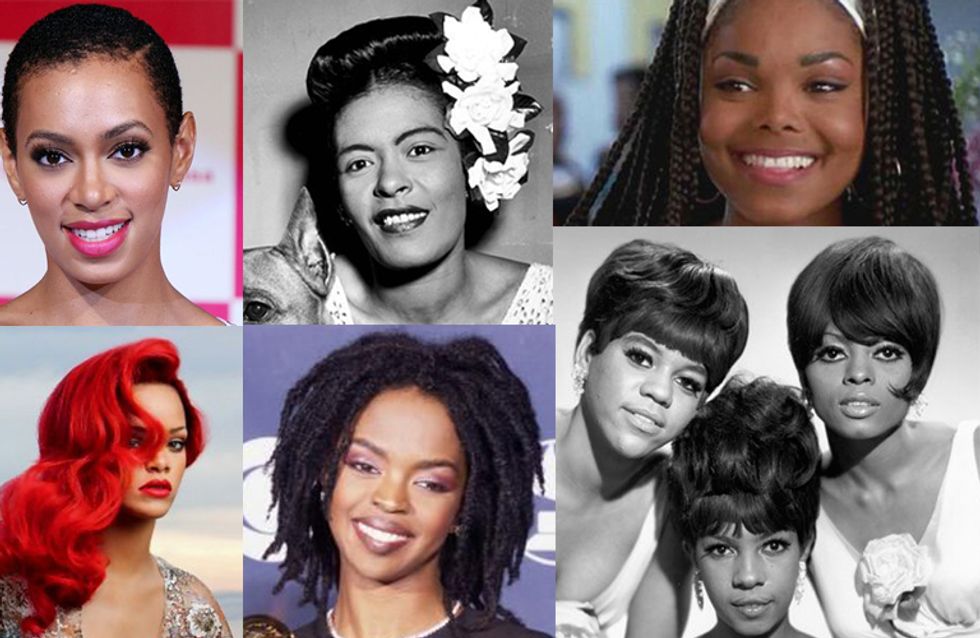 Since hair for many black women acts as an essential form of communication and identity, we have decided to pay homage to great women who have influenced hair trends.

Don't let anyone tell you different, black is indeed beautiful. Being a black woman right now is like being part of a rich, goddess, cultured organisation... or Black Girl Magic as many refer to it. As many black women know, getting to this stage wasn't easy. So it's only right we give respect to women who paved the way.

The first female American self-made millionaire..YAAAASSSSS GIRL! At a time when black women couldn't even vote, Madame C.J Walker came along and started off her own line of hair care products for afro hair texture.

The women who wore flowers in her hair. The jazz singer was known for accessorising her hair with flowers and teaming it with beautiful sweeping gowns. #GOALS

Before Queen B, we had Queen Nina Simone. Singer, activist and feminist, Nina either wore her natural hair or dressed it in scarves and prints that relayed back to her roots.

Dorothy was 50's glamour personified. The film and theatre actress, singer and dancer embraced her femininity in so may ways. Her signature style of glowing skin, dark lashes, rosy cheeks and bold red lips was both sexy and classy. She wore her hair pin curled and styled to perfection, a look that many women of colour imitated.

The group that gave us Baby Love, Stop! In The Name Of Love, Diana Ross and straight hair. The Supremes wore they hair relaxed and in wigs, a trend which many women of colour copied.

Back in 1968 and way before 'The Rachel' many women of colour were asking for 'The Diahann'. Diahann Carroll was the first black woman to star in her own TV series, and many women chose to copy her relaxed hairstyle with soft curls.

BLACK POWER! Political activist Angela Davis embodied the Black Power moment. She wore her natural hair, and let her tight curls grow into an afro and showed black women everywhere that they should embrace their beauty. Clinched fist salutes all round for this amazing woman.

Donna Summer was probably the lady who inspired your mum and your nan to wear the jheri curl. The soul singer made the style popular and sales of perm, activator and moistuisers rocketed during the 80's largely down to her. The style even featured in the comedy Coming To America.

You can't say Grace Jones without thinking of the word FIERCE! The singer, actress and super model showed us what it meant to be feminine and bad-ass. Her flat top fade haircut will always be a classic!

Halle Berry...The first and still the only black women to win the Academy Award for Best Actress in Leading role *rolls eyes*. The actress carried on from where Anita Baker left and inspired many women to wear short cropped hairstyles.

Still known as the Poetic Justice brides, Janet Jackson inspired so many women then and now to rock box braids.

Carol's Daughter, a brand every natural girl knows and love. Lisa Price started the range of hair care in her apartment. The range was designed to fit the needs of natural black hair. It's fair to say Lisa kicked off the natural hair movement.

Listed as one of the most beautiful people in 1999, Lauryn Hill rocked her locs proudly and influenced many women of colour to do the same.

Wearing her hair straight and long, singer Aaliyah inspired many women to permanently straighten their hair and wear weaves, a trend that is still hugely popular among black women.

Beyonce was quick to dismiss the idea that "black women can't rock blonde hair." From early days at Destiny's Child to the Queen that she is now, Beyonce has always looked amazing with blonde hair. It's fair to say Bey's blonde cornrows in the early 200's aided in the popularity of the style and inspired many black women to experiment with colour.

The hair chameleon herself. From her red hair to her pixie, to her bantu knots Rihanna SLAYYYYS and inspires many women to do the same. She uses weaves, wigs and her natural hair to change up her look, a trick many women of colour have mastered.

From her big chop to her AMAZING afro, Solange's natural journey inspired many women to embrace their natural hair. She is #hairgoals and #fashiongoals all in one truly inspiring lady.

From wearing dreadlocks on the red carpet to cornrows at fashion week, Zendaya is this generation's hair icon. I mean the girl has a barbie modelled on her and her hair and singlehandedly became the inspiration of millions of girls. She unapologetically expresses herself and embraces her culture through her hair styles and encourages girls to do the same. She is also queen of shutting down ignorant comments made about her hair. Her reply to Giuliana Rancic comments about her locs was just perfection.

We salute you ladies!

Were you inspired by these women? Tweet us @sofeminineUK

How To Style Box Braids: 50 Stunning Ideas From Pinterest

13 Things Girls with Afro Hair Are Sick Of Hearing