A red carpet is always the place to turn heads, and the carpet at this year’s Screen Actors Guild Awards was no exception. From Jennifer Lawrence’s form-fitting, strapless Christian Dior dress to Mariah Carey’s punk leather gloves, women stole the show at the SAG arrivals. By far the most shocking look of the night was Game of Thrones actress Natalie Dormer’s newly half-shaven head. Is her edgy new style a hit or miss?

It looks like every star known for their luscious locks is going for a new do. First Miley Cyrus chopped off her gorgeous long hair in favor of a buzzed punk look. Soon after, Jennifer Lawrence revealed an adorable yet edgy pixie cut.

Now Game of Thrones star Natalie Dormer has changed up her look as well. The actress, who has been known for her voluminous locks ever since her stint on The Tudors, debuted an all new haircut at Saturday night’s Screen Actors Guild Awards.

Instead of a full head of flowing blonde locks, Natalie rocked a half-shaven hairdo and lighter platinum hue.

The new haircut perfectly accented her edgy look. The stunning actress wore an intricate ear cuff and a gorgeous white Marios Schwab gown with black detailing around the arms.

The 31-year-old actress wore her new 'do with confidence as she walked the red carpet alongside her Game of Thrones co-star Pedro Pascal.

Like fellow actor Brad Pitt, Natalie admitted that her new buzzed haircut was not a personal decision. The new cut is for her upcoming role in The Hunger Games: Mockingjay, opposite award-winning actress Jennifer Lawrence.

The actress told E! News, “The hair department of Mockingjay did it and I love it. A little trepidation but I was excited.”

Actors will do anything for their craft! Do you think Natalie’s new hairdo is a hit or miss? Tweet us @sofeminineUK.

Check out Natalie Dormer's Before and After Hairstyles! 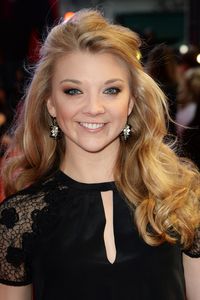 The Barmiest Brow Trends Of All Time

50 Chakra Tattoos To Show Off Your Spiritual Side