by Helen Turnbull Published on 14 August 2017 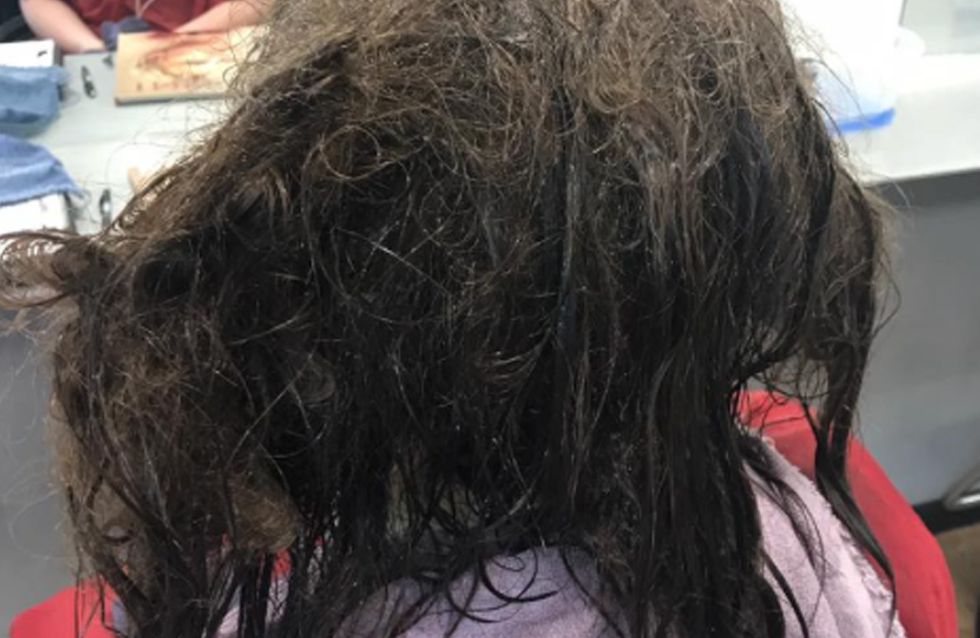 Visiting the hairdressers is stressful enough so you can spare a thought for this teen who was forced to confront a combination of her biggest fears. The 16 year old has been suffering with severe depression for a few years, not being able to face brushing her hair and only getting up to go to the toilet. When she visited a salon her hair was a matted mass and she thought the only option was to shave it all off rather than face the pain of untangling it but her hairdresser had a better idea.

When you're feeling low, how you look is the last thing on your mind and anyone who's ever experienced depression can sympathise with this Iowa teenager. The 16 year old had been suffering with severe depression when she visited her local hair salon in Waterloo, Iowa, ahead of her dreaded school portrait. Having not being able to face brushing her hair for a prolonged period of time, it'd grown into a matted mass and she asked for it be shaved off as the ordeal of untangling it was understandably too much to bear.

But the salon had other ideas with the girl's assigned stylist Kayley Olson refusing to shear off the lengths. The 20-year-old student hairdresser recalled the tale, which she branded "one of the hardest experiences", in a moving Facebook post last week which has since been shared over 75K times, at the time of writing.

Instead of chopping off the teenager's locks, Kayley took it upon herself to transform her look and give her back some of her self-worth and self-confidence which she'd lost to depression. She wrote: "When she walked in she told us just cut it all off I can't deal with the pain of combing it out, she called herself worthless for it. It honestly broke my heart and we tried everything we could to keep this child's hair for her!"

The girl - who Kayley wants to keep anonymous - confessed to the stylist that she felt so worthless, she couldn't be bothered to brush her hair which struck a chord with her. Rather than simply cut off the matted mass, Kayley selflessly spent 13 hours, over two days, untangling it before restyling her new shoulder-length haircut.

She added: "At the end of the day I want this to be a lesson to people. MENTAL HEALTH is a thing, it effects people all around the world and of all ages! PARENTS take it serious don't just push your kids off and tell them to get over something they legitimately can't.

"A CHILD should NEVER feel so worthless to not even want to brush their hair. After being here 8 hours yesterday and 5 hours today we finally made this beautiful girl smile and feel like she IS worth something!"

Kayley was delighted to share that her client was pleased with the finished result, so much so, she told her: "I will actually smile for my school's pictures today, you made me feel like me again."

Kayley's experience resonated with Facebook users with many sharing their own similar experiences in the comments while many others heaped praise on her for the selfless act. One wrote: "When my Mom was ill, I went through something similar. It felt selfish to take care of myself when she was dying. Thank you for being there for this young lady, when she needed help. I hope that you both have all the love, happiness and success that your hearts & hands can hold!"

Another added: "You may have just saved a life...being a teenager is tough enough but you are very special to have recognized there were other issues going on and cared enough to help change it."

Stress Less: 18 Habits To Harness for a Happier Life

Your Choice Of Instagram Filter Can Reveal If You're Depressed