You're damned if you do and you're damed if you don't. Eleven months ago Simone Anderson, a makeup artist from New Zealand, started documenting her weight loss journey on social media. But now, after losing more than 13 stone through lifestyle changes, a gastric sleeve and sheer determination she's being accused of lying about her drastic body change. Here's how she shut down her haters.

Eleven months ago, Simone Anderson decided to record her step-by-step weight loss journey on Facebook and Instagram, but what started as a simple way of recording her progress has spiralled into a social media frenzy.

After posting a series of before and after pictures, critics accused her of lying about her drastic 85.7kgs weight loss because...there was no loose skin.

One critic scoffed, "I do not believe it is the same person, phone covering her face. People that lose weight that fast from that surgery have extremely sagging skin and stretch marks not the same woman (sic). Yes she could lose the weight but that thin woman isn't the same person as the heavy one…no way."

How did she silence the critics? By posting her bravest before and after photo yet.

In the caption she explained that every single accusation about her weight loss "bothered [her] far more than it should". She never set out to glorify her progress, instead she wanted to give an honest reflection of her hard work.

She revealed that "after hours of crying and debating" whether to share her story online, posting her before and after pictures was the "hardest thing she ever had to do."

Simone then went on to shut down the haters:

​"So here we go I hope this helps all the 'non believers' - my face uncovered, yes my hair and eyebrows are a different colour as I'm going back to blonde, yes I have changed my phone from Samsung to apple and have moved house so the background has changed (it has been 11 months people, things change!), my skin colour varies in every single post as I get a spray tan once a week on a Thursday and often change the depth of the colour I get depending on what event I have that weekend [...]"

And on those final loose skin comments she said, "Yes I have loose skin and stretch marks but I don't feel the need to show them in every single photo I post online, I have shared my excess skin picture before so if you had bothered to click on my page you would have seen it and as for my ears changing in appearance?! Well I can't see that haha so who the hell knows!!! Maybe weight changes ears lol. Hope this helps

What do you think about Simone's weight loss pictures? Tweet us @sofeminineUK 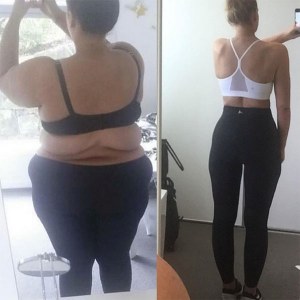 What do you think of Simone's transformation? Let us know your thoughts @SoFeminineUK

WTF Instagram's Ban On #Curvy Is Wrong On So Many Levels

10 Ways To Burn Calories On Holiday Without Even Knowing It

17 Celebs Who Have Spoken Out About Their Mental Health

Motivational Before & After Weight Loss Pictures

Inspirational Tips To Get Your Weight loss Mission Started

Why do we put on weight?

8 Dieting Myths BUSTED: What NOT To Believe When Losing Weight