Rhona’s at the hospital having taken Leo to his speech therapist when she clocks Donna. Intrigued, she follows Donna as she heads into the oncology department. At the appointment, Donna is left reeling when the doctor suggests she may only have between six to twelve months to live. Donna re-emerges to find Rhona waiting for her and in her distress reveals to Rhona she has cancer. Rhona is floored by the revelation.

Ladies man Tiny arrives at the cafe with the bread delivery and on learning Val and Eric are no longer together he tries his luck with Val. Enjoying the attention Val agrees to go on a date with Tiny which is noted by Pollard.

With Kerry keen to get wed, the factory girls wind her up about Dan’s lack of proposal, but Kerry remains determined. Later, Dan arrives home where Kerry is heavily laying on the hints that she wants to get married. When the penny finally drops, Dan abruptly makes his excuses, heading off in a hurry to meet Bob. Why is Dan so keen to avoid the subject?

Alicia lends Leyla her car but she returns earlier than expected explaining the car has been stolen. Bernice tells Andy there won’t be a repeat performance but will this really be the case?

Back in the village, Donna explains to Rhona she came back for April’s sake, so she can leave her with a family who love her. Donna tells Rhona whilst she knows Marlon will be the perfect dad to April, she will only tell him the truth when he has grown to love April the way he needs to. Rhona promises to support Donna who begs her to keep her secret. But will Rhona be able to stay true to her word?

Laurel confides in Nicola how she walked in on Marlon and Donna sharing some sort of ‘moment’. She is later reassured when she arrives home to find Marlon has cooked her a fancy meal. He explains there has been tension between him and Donna because Rhona had suggested Donna was in love with him, but Rhona has since clarified she had her wires crossed.

Val and Tiny are on their date in the Woolpack. Things progress well and Tiny seems keen for them to carry on. Diane insists to Val she must tell Tiny she’s HIV positive but Val seems adamant not to.

When Victoria tells Kerry she heard Dan and Bob discussing weddings, Kerry’s spirits are raised, but only temporarily. Alicia is still fuming with Leyla for allowing her car to be stolen unaware David has messed up too. 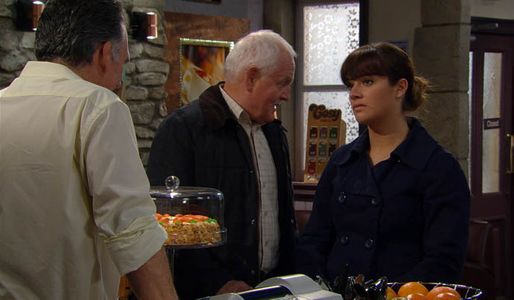 Emmerdale 01/01 – A dark turn of events for Lachlan