Sienna is determined to prove that Maxine is taking her dad for a fool. Patrick doesn’t believe a word of it and tells Sienna that he trusts Maxine because she’s going to help him die. Sienna is boiling with anger and tells her dad that Maxine still wants to be with Darren. He still doesn’t believe her until he overhears Maxine talking to Darren at the flat, while they think he’s sleeping. Patrick is furious but keeps his temper in check. He arrives at his tribute concert at the school and Sienna is frustrated to see Maxine by her father’s side again. Patrick reassures Sienna that he’ll deal with Maxine in his own way…

Alfie introduces himself to Nico, she allows him to follow her to school but doesn’t want to make friends anytime soon. However, she changes her mind when Alfie introduces her to his pet lizard, ‘Jub-Jub’. Nico hits on a plan and persuades Alfie to take Jub-Jub to school, but they panic when he goes missing! Alfie is embarrassed when Jub-Jub makes a guest appearance at Patrick’s tribute concert. Nathan tells Sienna and Ben to keep Nico away from Alfie – she’s a bad influence.

Mercedes is stomping around the McQueen’s like a bear with a sore head. Cameron and Celine are gobsmacked when Mercedes dolls herself up and heads out to The Tugboat. Lockie and Mercedes kiss and they’re both annoyed when Cameron and Celine turn up. Mercedes is offended by some of Lockie’s comments towards her and storms out, straight into Joe’s arms. But Lockie has spotted it and won’t let her use him.
​
Nancy books Charlie an appointment with a child psychiatrist, both her and Darren hoping they get to the bottom of his strange behaviour. However, Nancy is furious when Darren forgets to take Charlie while she’s at Patrick’s tribute concert. 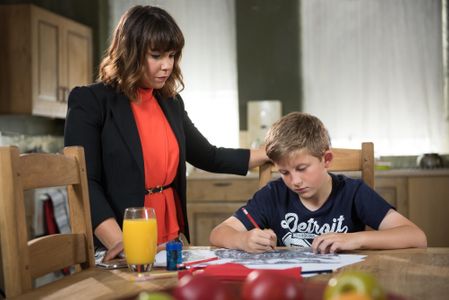 Hollyoaks 02/05 – Patrick tries to sort things out with Maxine