Holly tells Kyle that she’ll be at his party tonight and Dylan supplies Kyle with some pills. Tom wants to go to the hospital with Peri for her next appointment but she confesses that she’s going with Angela instead. Dylan invites Tom to Kyle’s party. At the party, Holly walks off into the woods with Kyle. Tom wants to forget about Peri and takes some of Dylan’s pills.

Robbie pleads with Trevor not to kill Kim so Trevor gives him twelve hours to get Kim out of the country or she’s dead. Robbie warns an alarmed Kim about Trevor’s plan and books a ticket for her to Malaga. However, Kim changes her mind on the way to the airport and grabs the steering wheel, making Robbie swerve the car. Jason is on duty and spots the out of control car, he gives chase. He tracks down Robbie and the twins argue, resulting in Jason flying over the edge of a ravine.
​
Scott pretends he’s sleeping rough to Sinead and Ste. He breaks into Diane’s flat for a shower and plays the sympathy card so Ste and Sinead invite him to stay for one night. 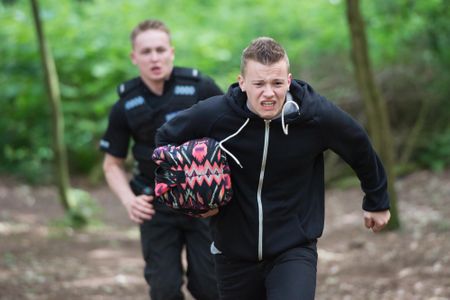