The police turn up at Cindy’s flat with a search warrant. Holly panics that the video of Robbie declaring his love for her is still on Dr S’Avage’s laptop and tells Robbie to get to it before the police and Jason do. Meanwhile, Ben arrives at The Boarding House to speak with Charlie, who confirms that he saw Trevor killing Dr S’Avage. Grace is at the police station demanding that Trevor is released but when Ben tells her about the new witness and she sees the Osbornes, she’s furious. Elsewhere, Robbie puts on Jason’s police uniform, to get the laptop back for Holly. He goes to Cindy’s flat and signs out the laptop under Jason’s name. Grace turns up at The Boarding House drunk and asks Esther for help with Curtis. However, when Esther goes upstairs, Grace snaps out of her act and starts looking for the police folder that Ben gave the Osbornes earlier. Charlie sees her and Grace offers to take him on a ‘little trip’.

​Theresa apologises to Zack for standing him up but Lisa knows that she was doing the photo shoot. Lisa poses as Theresa’s agent and steals the USB stick from Shaun with Theresa’s photos on. However, Shaun tracks them down and Zack overhears what’s happened.

Harry feels awful as John Paul packs up his belongings at school, but will he finally come clean? Harry gets into a fight with Kyle and they’re hauled into Mrs St Claire’s office. 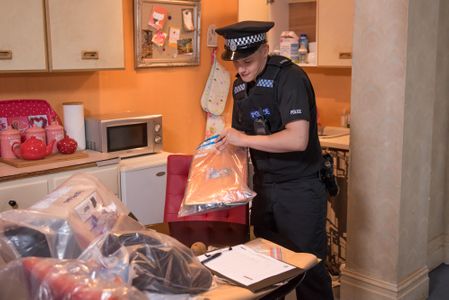 Hollyoaks 11/11 – The McQueens are oblivious to the danger ahead

Hollyoaks 10/11 – Will John Paul's fears for his cousin's happiness derail the wedding?