Hollyoaks 17/05 - Zack And Leela Are Caught In The Act

Ellie is pushing for Mac to get his second opinion as soon as possible. Marnie puts on an emotional performance when she tells the family that Mac has already had a second opinion, but he must have forgotten. Everyone is alarmed when Mac blacks out.

Lisa agrees to help her mum match make Zack and Cleo. Jealous Leela sees Zack and Cleo together and drags Zack into the toilets at The Bean. Meanwhile, Cindy is humiliated when her speech goes wrong at the press launch in The Bean. She runs to the toilets and hears Zack and Leela getting amorous in the cubicle. She plants her microphone in Leela’s coat pocket so they can be heard by everyone outside. Simone is in the middle of her speech and Cindy feels victorious when Zack and Leela emerge from the toilets to a shocked audience and embarrassed Simone.

Warren asks Cleo to help Joel take his mind off ‘whatever’ is getting him down. Cleo catches up with Joel later and he tells her to stop throwing herself at him.​​ 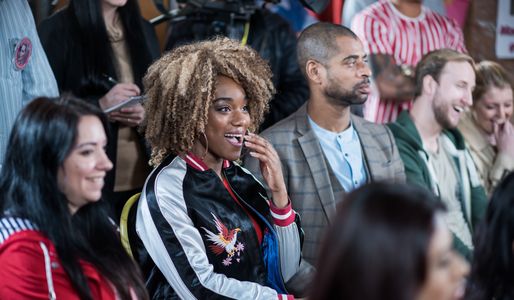 Hollyoaks 16/05 - Zack Urges Leela To Make Up Her Mind