Cleo bumps into Holly outside Esther’s Magic Ben and Holly can tell there’s something seriously wrong with her friend. Porsche arrives at her birthday party in The Folly and is furious when she notices Reenie has decorated the venue with ‘Happy Engagement’ banners. Porsche gets more and more drunk.

Harry and Ste bang on the toilet door but the music at The Folly masks their shouting. Harry doesn’t seem too upset about being locked in a confined space with Ste though. Sinead sees Scott at The Hutch and realises what she’s done, while Harry asks Ste about his relationship with Sinead. The pair gets closer and they kiss.

Joe tries to make it up to Mercedes but she has other plans and makes a play for Lockie at Porsche’s birthday party, but he rejects her. Mercedes arrives back at the party with Joe to make Lockie jealous. It seems to be working as Lockie looks from his drunk wife, to seductive Mercedes. He writes a suggestive text to Mercedes but accidentally sends it to Porsche; he manages to talk his way out of it and goes round the back of The Folly with his wife. However, when they’re finished, Mercedes propositions him and this time he can’t say no. They’re unaware that as they’re kissing, an oblivious Celine has taken a photo of John Paul, with them in the background.

Nico is pining after Dylan but when she tries to make up with him and it doesn’t go to plan, she attacks him and has to be pulled away by Maxine and Scott. Dylan instant messages ‘GothBoy98’ and freaks out when ‘GothBoy98’ reveals they like to wear women’s clothes too. Elsewhere, Maxine tries to get through to Nico. 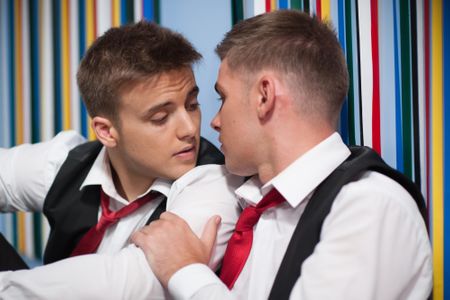