The McQueens are merrily getting ready for Reenie and Pete’s wedding, apart from Cleo. Pete sneaks up to the living room window and beckons her to come outside. He promises that he still loves her but has to marry Reenie to look after her. Meanwhile, Myra goes to see Diego to tell him to leave but when he kisses her, she can’t resist. Elsewhere, Cleo spots Pete with Jade in the village and tells him she’s stopping the wedding. He drags her into the alley to talk her round but Harry sees them and chases after her when he sees she’s upset. Meanwhile, Reenie walks down the ‘aisle’ towards Pete. Harry can’t believe it when Cleo tells him about her relationship with Pete and storms off to tell her family. As Reenie and Pete are declared husband and wife, Harry bursts through the doors. Elsewhere, Darren and Jack tell Jade that social services have found her a permanent foster home.

Cindy and Dirk arrive home and Cindy is desperate to keep her husbands away from each other. Mac catches up with Cindy in Price Slice and Simone is stunned when she overhears them talking about their secret marriage. Cindy explains her history with Mac but Simone urges Cindy to tell Dirk. 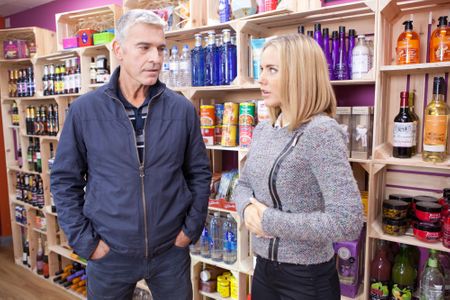 Hollyoaks 11/11 – The McQueens are oblivious to the danger ahead

Hollyoaks 24/09 - Pete finds Reenie getting drunk in the pub