Peri refuses Frankie’s cheque. Leela confronts Frankie, and Tom sides with Leela and Peri. Frankie brings Angela, Mark, Tom, Peri and Leela back together and Peri and Tom accept The Browns as adoptive parents. They are all relieved, apart from Tom who gets out a photo of the baby scan, fighting back tears.

Pete reels Cleo in again, while Porsche and Harry realise Cleo is missing. Cleo arrives at The Dog with Pete - it’s obvious Cleo has given in to Pete’s demands. Later, Cleo tells Pete she’s got plans with Harry but while the rest of the McQueens go for a Chinese, Pete goes back to Cleo.

Tegan is feeling uneasy around Diane. Scott rings Tegan urging her to come round and look after Rose, but the ‘emergency’ is that he has a date with a Beefcake Boy. Tegan takes a photo of her daughter and posts it to Diane to make her feel better. 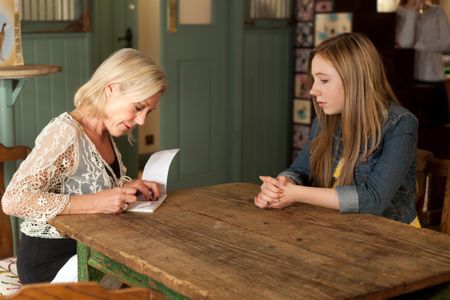 Hollyoaks 23/07 – Who will Lindsey choose to stand by?

Hollyoaks 10/07 – The net closes in on Fraser’s murderer