Mac hides his and Cindy’s fake divorce papers behind a photo frame in The Dog, while Neeta is excited about going to a wedding fair. Alfie finds a mobile phone outside The Dog and Mac instantly recognises it as Cindy’s. He insists he should be the one to return it but Alfie tells Nathan he’s suspicious their dad is having an affair with Cindy. Nathan finds the fake divorce papers and confronts his dad.

Elsewhere, Cindy gets her phone back but when she charges it she notices a voice message from Dr S’Avage at Pride. Cindy confides in Lindsey that the message reveals a woman is behind the murders and that she’s going to the police.

Lisa catches Zack and Theresa kissing. Theresa overhears Jade calling Lisa by her real name, Sonia and confronts Lisa. Lisa opens up to Theresa about Wayne but doesn’t tell her the whole truth about her being a fake Loveday. Zack reveals that Simone has won The Herald’s Mum of the Year award and that a photo of them all will be on the front page of the paper. Lisa panics that this could uncover her true identity.

Nancy is falling for Darren again. 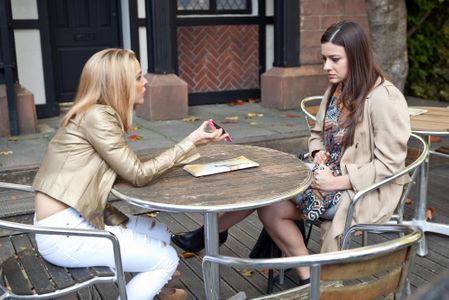 Hollyoaks 23/11 - Ellie Knows She Has To Fight For Freddie