Celine leaves a postcard for Cameron at the boat, saying that she does want to be his girlfriend, but it falls out of sight. She sees an intimate moment between Cameron and Leela and gets the wrong impression. Later, Peri finds Celine’s card to Cameron and throws it in the river. Lindsey encourages Celine to talk to Cameron but Ziggy tells them Cameron is with Leela. Furious, Celine storms round to the Lomax’s and catches Cameron and Leela…

Dylan prepares for his day in court. He visits Nico and asks her to support him but she lashes out, masking her fear and guilt about Carly. Dylan tells her to forget about them being boyfriend and girlfriend. Esther is surprised to see Kim and tells her to leave. Grace and Trevor arrive and give Esther the parental order forms to sign.

Esther tells Grace and Trevor that she’ll let them keep Curtis, but she just wants one night with him on her own. Meanwhile, Dylan is trying to call his dad but it’s going straight to voicemail. Grace and Trevor return to an empty flat but Grace is worried about leaving Curtis with Esther and asks Trevor to do a detour to the hospital on the way to court. They’re horrified when they hear that Esther has discharged herself and left with Curtis and Kim. Dylan is dressed in women’s clothes to go to court and Tom, Peri and Nico are by his side. However, Trevor doesn’t turn up and Dylan thinks his dad can’t accept him. Trevor and Grace arrive at The Dog car park in time to see Kim and Esther speeding away in Jack’s car and they chase after them.

​Trevor and Grace are still chasing Kim, Esther and Curtis. Grace catches them and tries to pull in front but clips Jack’s car, sending them all into a spin. Trevor races to Jack’s car and takes Curtis but just as Esther’s about to chase after Trevor, a police van crashes into their car. Trevor, holding Curtis, watches in shock. 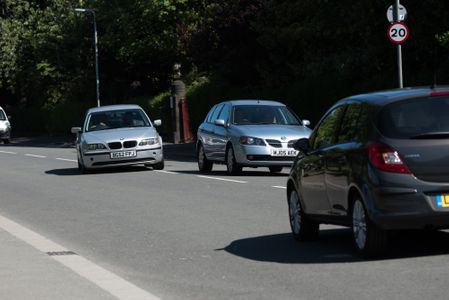 Hollyoaks 18/12 - Cameron is dressed up as Willy Wonka