Esther and Scott have gone into Gay Pride overdrive and present their ideas to Tony. He lies that the council haven’t approved their plans but feels pressured when the University LGBT committee arrive at The Hutch. Tony is pleasantly surprised by how much money they’re spending and when Esther tells him it’s a shame he can’t cash in on the ‘pink pound’, Tony has a change of heart and declares Hollyoaks Pride back on.

Leela is drunk and goes to The Dog to see Peri. Peri still wants nothing to do with her. Tegan takes Leela home. She leaves Leela to sober up, but when Leela gets a call from work she picks up her car keys and heads out for her shift. Tegan goes to see Ziggy and he’s confused to hear Leela’s been drinking ‘in her condition’. They’re panicked when Tegan gets a call from the hospital saying Leela’s been injured in a fire.

Pete placates Cleo for now, but knows she’s a ticking time bomb. Peri knows Cleo is seeing someone with a girlfriend and encourages her to tell the truth – secrets always come out. Cleo braces herself to tell Reenie about her and Pete.

Harry finds out that Ste is on his own at the flat and goes to see him. Ste’s first instinct is to push Harry away. But the pair can’t keep their hands off each other and kiss. However, they’re interrupted by Diane arriving home and have to hide behind the kitchen island. 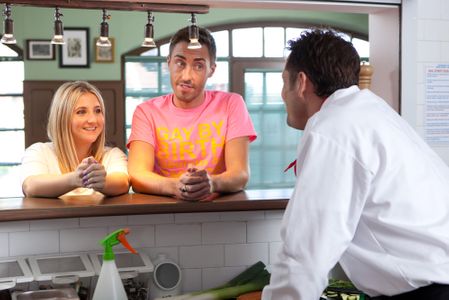 Hollyoaks 25/09 – The McQueens’ plan for revenge has dangerous consequences

Hollyoaks 24/09 - Pete finds Reenie getting drunk in the pub