Tom tells Cameron to sabotage Angela’s visit with Peri or he will expose his confession. Cameron attempts to paint Angela in a bad light.

Tegan is released and goes to Diane’s to see Rose but they push her out. Tegan is still seething with Leela. She tells Scott to bring Rose to her or she will reveal he was part of the kidnap too. Later, Diane busts Scott trying to sneak Rose out of the house but he covers by telling his aunt that Tegan threatened him. Diane confronts Tegan; Tegan tells her the truth but it falls on deaf ears and Tegan launches herself at Diane, who then fights back. They scuffle and Leela and Scott race to split them up. The contents of Diane’s handbag are strewn everywhere and Tegan notices her bottle of vitamins. Afterwards, Diane tells Scott he has a month to find a new home. Elsewhere, Diane is in bits and, in the heat of the moment, kisses Tony but then pushes him away. Rejected, he observes Diane’s vitamin tablets. We see a shadow replace Diane’s tablets with an identical tub, then Diane takes two – but who has tampered with them and with what? 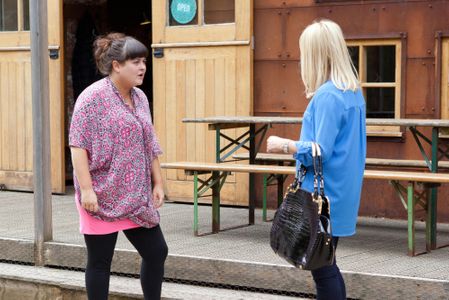 Hollyoaks 28/08 - Are things unravelling for Sienna?

Hollyoaks 28/08 – Sienna’s desperate to keep Dodger to herself

Hollyoaks 08/08 – Cindy plans to run away with Rhys