Cameron tries to convince Peri to get out of the car and promises to leave if that’s what she really wants. Peri tells everyone she wants to speak to her dad. Darren shows Nancy the latest drawing and they come to the conclusion that something must have happened to Charlie at the Pride festival.

​Elsewhere, Tegan tries to convince Ziggy that Leela is in love with Cameron, but Ziggy has already had too much heartbreak and doesn’t want to listen. Meanwhile, Peri tells Cameron she doesn’t have Post Natal Depression – she just doesn’t want to be a mum. He urges her to tell Tom the truth, which she does. At the Lomax’s, Tegan packs her bags and goes on holiday. She tells Ziggy to “have a nice life”.

Diane is stunned when Scott reveals that he ended up as his nan’s carer when he got sent to live with her after his parents separated. However, he knows when he’s not wanted and heads for the bus stop.

Neeta refuses to leave until she speaks to Mac. Ellie has to think fast about how to get rid of her. She manages to sneak Neeta out the back as Mac, Nathan, Rachel and Alfie arrive home. Neeta writes a letter to Mac and asks Ellie to give it to him but Rachel is suspicious that Ellie is up to something. She hits gold when she finds Neeta’s ripped up letter. 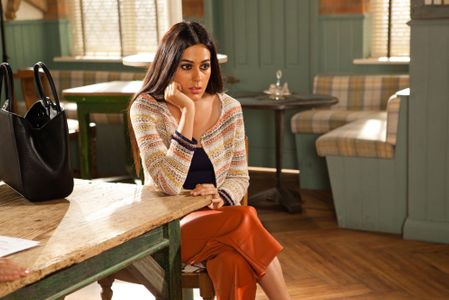