Diane is in hospital with a worried Scott and Tony by her side. Dr S’Avage confirms that someone has been poisoning Diane. Diane accuses Tegan again and says she’s got proof. Tony tells Ste about the hidden camera that Diane planted and Ste panics that it will have filmed him kissing Harry. Tony arrives back at the hospital and hands the camera to Diane.

​Leela gets drunk again and clashes with Trevor.

Ste tells Harry they need to cool off for a while, but is worried about what scorned Harry might do. Tony asks Ste to chaperone him to a gay bar so he can hand out flyers for Hollyoaks Pride. Ste is surprised to see Harry there, while Tony arrives with Ziggy, who has been invited under false pretences and thinks he’s at a gentleman’s club. Ste and Harry hide in the toilets but Tony is looking for Ste and opens one of the cubicle doors to find a sheepish Ste and Harry inside… Meanwhile, Ziggy is a big hit with the rest of the club-goers, still unaware he’s at a gay bar.

Cindy questions why Holly shouted Trevor’s name in her sleep. Holly tells her mum he owes her money for babysitting Curtis, so Cindy goes to confront Trevor. Trevor is worried that Holly is close to blabbing about the kidnap and goes to see her at school. Cindy is suspicious when she turns up to give Holly her coursework and sees her and Trevor walking away from each other. She asks Holly whether Trevor is threatening her and later, Holly smashes Trevor’s windscreen. 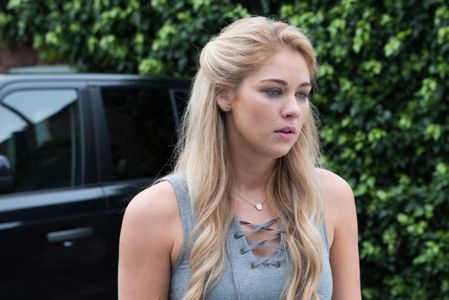