Jason reveals too much to Robbie about him and Cindy. Meanwhile, Kyle and Aiden offer Holly a legal high, which she refuses. Cindy turns up at the Roscoe’s and tries to undress Jason. He decides to tell Dirk she’s not taking her medication. The wedding dress Cindy ordered has arrived and she tries it on while fantasising about Jason. She turns up at the police station in the dress. She meets up with Kyle and Aiden who take her to a party and give her pills. Robbie gives Nancy the £6k he stole from Wayne and lies that it’s his savings. She reluctantly accepts. They go to the park and Robbie is alarmed when he spies two police officers at the site where he mugged Wayne, and they’ve found his sunglasses… He asks Jason to get the glasses back, or he’ll tell Holly that he kissed Cindy.

Ben returns to the village and tries to speak with Sienna. She doesn’t believe that Carly is a ‘friend’. Ben asks Jason to do some surveillance for him, Jason is unaware he’s watching Ben’s house to make sure Carly stays out of trouble. He tries to chase her when she uses a coat hanger to unlock the door and escapes, but he loses her. Nico pushes Sienna to give Ben another chance, so she goes to the station and kisses him. However, Sienna overhears Ben on the phone and thinks he’s cheating on her with Nancy. 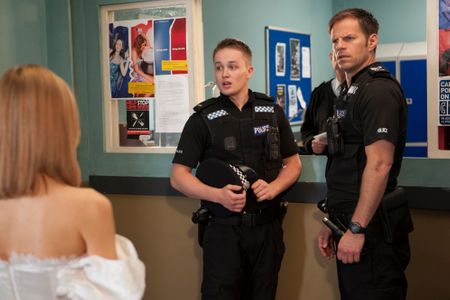 Hollyoaks 24/07 – Will Cindy confess to her deep secret?

Hollyoaks 13/07 - Leela Worries When She Sees Cindy With Armstrong

Hollyoaks 30/07 – Can Patrick convince a loved one he's changed?

Hollyoaks 14/05 - Dirk and Cindy wed, but has Cindy made the right decision?