Hollyoaks 4/09 - Nico is furious when Kyle defaces a memorial

Nico is furious when Kyle defaces a memorial that she made for Dylan at school. She thinks he’s Goth Boy and punches him. Patrick interrupts their fight in the corridor and summons Nico and Sienna to his office. He warns Nico to keep herself out of trouble if she doesn’t want people to know what she’s really capable of. Meanwhile, Kim is threatened by Trevor in the village and thinks he is using Dylan’s mobile to torment her. Nico is cornered by Kyle and his cronies outside the coffee shop. Kim interrupts them and takes Nico to safety.

Jason is desperate to get Holly back, and Robbie is secretly happy when he sees his brother is failing. Robbie gives Holly the chance to get a job as Curtis’ babysitter when he can see Trevor is struggling. At The Loft, Trevor has a meeting with an undertaker to discuss Dylan’s funeral but hauls him out by his collar when the undertaker makes an innocent comment about the dress that Dylan will be buried in. Holly is impressed when Robbie defuses the situation.

Jason turns up at The Loft to arrest Trevor and Robbie for assault on the funeral director.

Darren is concerned when Theresa makes a comment about Patrick not changing, even though he’s ill. 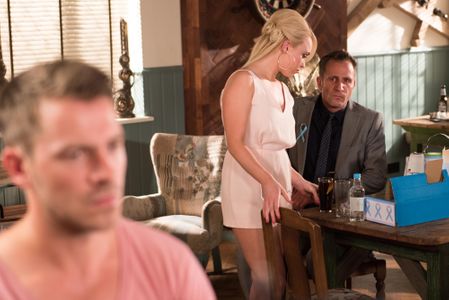 Hollyoaks 22/09 – Is Nico about to rumble Patrick's big secret?