Nico decides to tell Jason about Holly’s affair and plants a napkin under his coffee cup at The Bean, which reads “Holly is cheating on you.” Jason goes to Holly’s and sees a hooded figure trashing the flat. They push past him but send him flying into the leg of the kitchen table and he falls awkwardly on his shoulder. Holly rushes in after Jason and is alarmed to find him crying out in pain.

Maxine is curious when she arrives home to find an estate agent measuring up the flat. Patrick explains he just wants to know how much it’s worth so Sienna and Nico will be provided for. He’s delighted when worried Jason comes round and asks how he is – convinced Patrick is being neglected. Patrick is keen to get rid of Maxine after arranging a meeting with his solicitor to sign the flat over to her, and is further alarmed when his solicitor tells him Maxine will have to sign the papers too.

Harry is jealous when Ste invites John Paul over for dinner. Ste makes an effort and sets up a candlelit table in the Lomax’s living room. 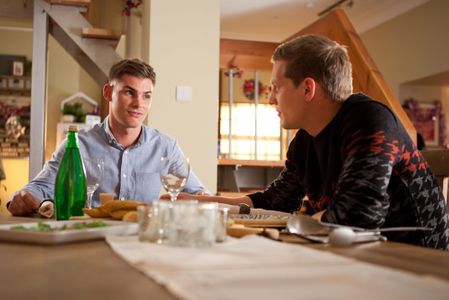 Hollyoaks 17/12 - Will Nico finally find out the truth?

Hollyoaks 20/12 – Danny fears his affair will be revealed

Hollyoaks 4/09 - Nico is furious when Kyle defaces a memorial