The finger of blame is pointed at Nico after Jason’s accident. Patrick suggests that Sienna should send Nico off to boarding school and at first she refuses, until she overhears some damning evidence against her daughter… Nico is furious at her mother’s suggestion to go to boarding school and lashes out. Sienna lies to Maxine and Patrick that her injuries are down to her getting mugged but Maxine is suspicious when Sienna doesn’t want to get Ben involved. Meanwhile, Ben tells Jason that the person who broke into Holly’s flat had their own set of keys. Holly thinks Robbie attacked Jason and meets him at the garage.

John Paul arrives at the Lomax’s to talk to Ste but is devastated when he sees Harry there. Later at school, John Paul reluctantly gives Harry and Ste his blessing. Harry goes to see Ste but storms off when Ste tells him the night before was a mistake. Ste is tempted by a bottle of wine on the kitchen work-top. 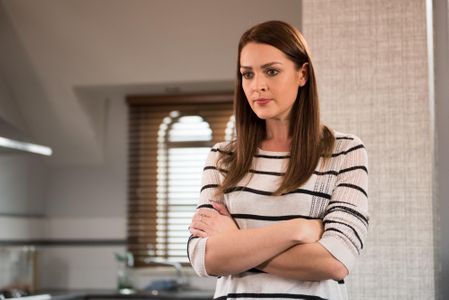 Hollyoaks 17/12 - Will Nico finally find out the truth?

Hollyoaks 26/7 - Peri and Nico are trapped in the bunker