DS Drake visits the McQueen’s. When Cleo realises Porsche and Reenie are behind the visit she refuses to talk. Cleo quietly slips out of the McQueen’s meal at The Dog to visit Pete. She tells him about the police coming round and he encourages her to keep quiet.

Ste returns from a night out and comes up with a drunken idea to show Harry how he feels. He spray paints the school corridor with a large heart with his and Harry’s name in the centre.

Ben spots a troubled Nico and tells her he’d like her to take his surname when he marries Sienna. Ben and Nico return to the Blake’s to tell everyone the news but Patrick can’t believe Nico’s lack of remorse about everything she’s done.

Myra hosts a McQueen dinner at The Dog where she locks horns with Ellie and Ste. Later, tipsy Myra and Diego head back to their campervan but it’s been ransacked. Myra immediately suspects Ellie, and is suspicious when she finds a recent photo of Diego with a woman among the mess – is this proof Diego is not all he seems? 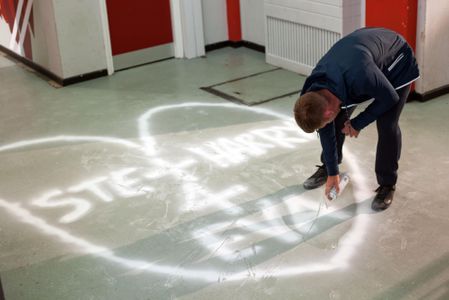