Home / Women in Focus / Key debates / Is This The Most Misogynistic TV Show In The World? Dutch Series Makes Contestants Guess Whether A Woman Is Pregnant Or Just Fat

Is This The Most Misogynistic TV Show In The World? Dutch Series Makes Contestants Guess Whether A Woman Is Pregnant Or Just Fat

by Helen Turnbull Published on 13 April 2017 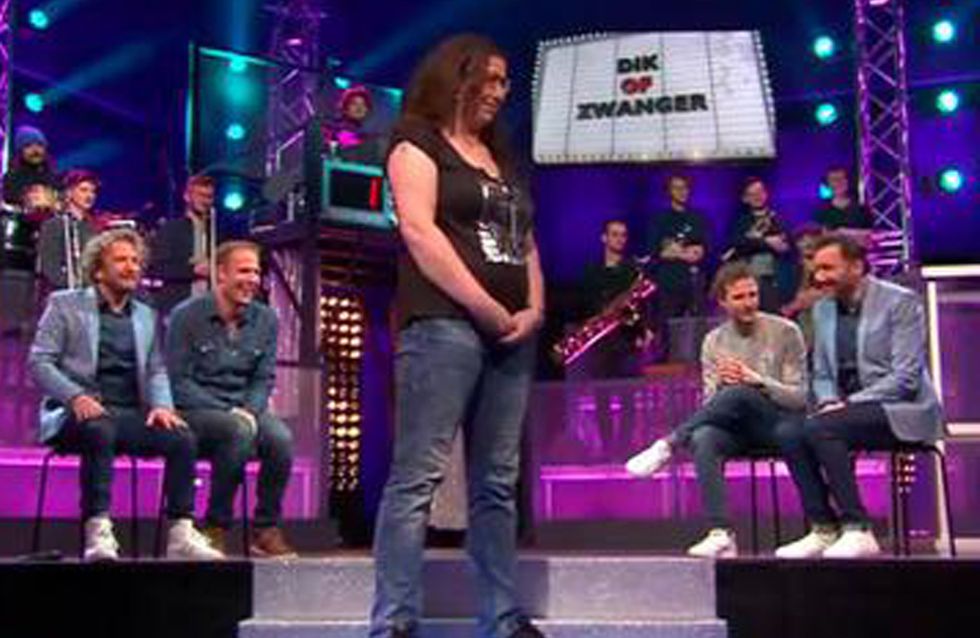 A Dutch reality show has provoked a feisty backlash from outraged viewers after a segment which asked four male contestants to examine a female volunteer's clothed body to decide if she is expecting or overweight aired recently. The gameshow - entitled Neem Je Zwemspullen Mee which translates to 'Bring Your Bathing Suit' - defends its content as 'satirical', insisting the purpose of the challenges is for contestants to challenge taboos.

Viewers of Dutch gameshow Neem Je Zwemspullen Mee were left raging this week after its latest episode showed four male contestants being 'challenged' to inspect a female volunteer's clothed figure in order to determine whether she is pregnant or just plump around the stomach area. True story.

One outraged viewer shared her disgust on Twitter, fuming: "Welcome to the Netherlands, where we apparently have a TV show where men guess if a woman's fat or pregnant. I f**king can't." Another raged: "For everyone thinking The Netherlands is great. We reached a new low yesterday night. National TV game show: 'is she pregnant or just fat?'"

For everyone thinking The Netherlands is great. We reached a new low yesterday night. National TV game show: "is she pregnant or just fat?" pic.twitter.com/HlNiBGYeJ4

If that's not enough to make you curl up into a ball, never to face the world again, you'll be pleased to know this isn't the full story. No, another equally shocking segment asked the contestants, again males, to determine whether a women's breasts are real or fake. But the icing on the cake has to be the racially-motivated 'game' - shown in a pilot episode last year- which asked participants to guess whether a handful of Asian volunteers are Chinese or Japanese

Unsurprisingly, the series production company Kro-Ncrv has defended the offending content, insisting it's satire aimed 'laughing off all forms of prejudice'. In a statement released to The Telegraph, makers of the programme claimed that: "By forcing people to make snap judgements based on appearances and then evaluate their decisions, stereotypes and taboos will be challenged." We're all for challenging stereotypes but there are countless, better ways of doing to without having to resort to judging people's appearances on national television.

The people of The Netherlands are not convinced by the show's premise - so much so a petition to pull it from scheduling has been launched and it's had over 3,000 signatures so far.

What do you make of Neem Je Zwemspullen Mee's controversial challenges? Let us know @soFeminineUK

This Girl Shames Disgusting Online Creeps in The Best Way

Two Girls Were Banned from A Flight For Wearing Leggings